Well, what an EXCITING time I had of it yesterday afternoon! After emailing everybody I wrote the last blog entry then thought "Ooh, I wonder if anyone's bought an album yet?"

Nobody had - I was a bit disappointed but carried on, and a few minutes later looked at my email... to find a HUGE PILE of emails saying "MARK! The web address you gave us for the early bird offer is WRONG!" AHA! THUS i went through and RE-emailed everybody with the CORRECT address, and LO! The Early Birds FLOCKED in!

And MY how they flocked, it was like a PANIC SPREE for a couple of hours with new orders coming in FASTER than I could log them on The Database Of ROCK. As part of the early bird offer I'd also put in a COMBO deal where you could get the album AND the t-shirt for only 15 quid, and much to my surprise LOADS of people - in fact, the vast majority of them - DID SO. And who could blame them, when it's a product as DELICIOUS as this? 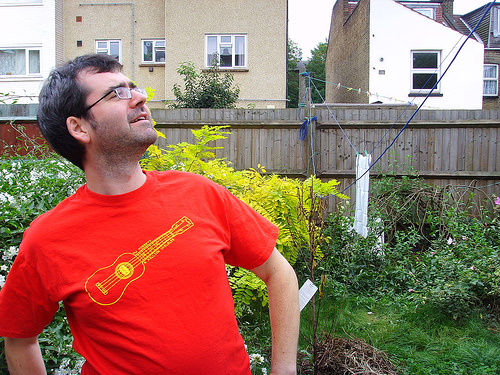 Contact usual address for MODELLING ASSIGNMENTS... anyway the upshot is that there's only around 40 copies of the album left now, so Early Birds: GET MOVING if you want one! We had a Household Conflab about it all last night, as I was thinking of doing another version of the album - NOT a handmade one, but a normal manufactured cardboard wallet one. I thought MAYBE this would be OK, as obviously i couldn't go back on saying there'd only be 200 handmade ones (and goodness knows I REALLY WOULDN'T WANT TO!) but could perhaps justify a second issue in a more normal style. After SOME discussion I decided NOT to do this and leave it AS IS - after all, it is MEANT to be a Download Album, so I'm going to leave it like that. It DOES still feel a bit weird to be about to go on tour to promote an album that I may not actually have any COPIES of, but I can always do iTunes Flyers i guess!

MEANWHILE, one very exciting THORT cropped up - TWO people in the space of ten minutes emailed to ask whether there was ever going to be a re-issue of This Is Not A Library, our LARGE album from 2003. This sold out a year or two ago and has since only been available on download, but it did STRIKE me that, now i've found this lovely company that do short run CDs so well, MAYBE I could do a small reissue of THIS album? The Vlads seem keen - INDEED there is KRAZY TALK of doing a launch gig where we play the whole thing from start to finish - and there's a nice idea that we could add on the b-sides to Milk & Baubles, which is on the very BRINK of going out of stock. It's VERY tempting, especially as This Is Not A Library is probably my FAVOURITE of our albums, and it WOULD be nice to be able to inflict it on people again - especially as we could put "ALBUM OF THE YEAR - ROLLING STONE" on the cover - but I'll wait and have a think about it when all this EXCITEMENT is over.

One thing i very much WILL be doing, however, is ordering a whole load more t-shirts! We're having a PRODUCTION LINE at home next Tuesday to pack them all, as by then i should have all the albums made too, and I've almost run out of some sizes. INDEED, this shirt has ALREADY outsold the I VALIDATE! Tour t-shirt. WHOOO!

YES! this is a GRATE idea (re TINAL)! i'm pretty certain there are a couple of songs on there i've never heard you do live...
posted 11/10/2007 by CarsmileSteve

A reissue of TINAL would be rather GRATE and I certainly would like to purchase one to fill the gap in the collection for sure.

I concur, TINAL would be ace to get hold of again, as my copy was PURLOINED by a nasty sort of person.
posted 12/10/2007 by ray k is foreign

I have been introduced to your GRATE music by a good friend of mine, and I would very much like to buy a flat round shiny thingy with that album on it. So yeah, do it!
posted 12/10/2007 by Anonymous