Whenever I come to the end of a job, or a big project, or know that this is The Last Time for something, I always want to get a big FEELING about it. It doesn't feel right if something finishes without a MOMENT, and the one for the completion of the Dinosaur Planet ALBUM happened to me several hours before it really was finished.

As usual I'd set off for St Pancras with plenty of time to spare before my train left, which gave me time to go and have a pot of porridge from Pret for my breakfast. I've done this LOADS of times while mixing the album, and as I sat down to eat I suddenly realised that this would be the last time I'd carry out this lovely bit of routine. I didn't feel sad, exactly, more happy that something as delightful as this could become a routine.

I ZOOMED up to Derby and arrived in the studio about NOON to find everyone hard at work. Tom and Robbie were HUNCHED over the mixing desk and they STAYED that way for the next seven hours or so, with me and Tim largely loafing on the sofa, occasionally chipping in with THORTS when needed. There was lots to do, but the longer we've gone on with these mixes (i reckon this is about the third or fourth time we've DONE a big mix/re-mix of the whole album) the smaller the jobs have become. Where previously we've had entire songs to fix, this time around it was things like changing the volume of one line of dialogue, or adjusting a seque slightly.

There was still room for some LARKS though - the choruses of For The Fate Of The Earth needed BEEFING up and, initially, Tim suggested some HORNS or WOODWIND. Tom and Robbie pointed out that MORE melodies might interfere with the violin OCTET, French Horns, keyboards, explosions, dinosaurs, guitars, bass, drums, percussion and triple tracked vocals that were ALREADY on the track so in the end we settled for ANOTHER guitar (huge fuzz chords: ACE!) and what Robbie called "Gang Vocals" but which WE termed "Miners" and "Vikings" i.e. the three of us stood round the microphone BELLOWING ALONG. We also used this to add a Crowd Cheering For Victory at the start of A Little Bit More and NEARLY ended up doing Armoured Pterodactyl impersonations that way too. Luckily we disovered there were ALREADY armoured pterodactyls on the section concerned, they were just being blotted out by screaming robots, missile launches and an orchestra.

I'm really going to miss all this when we have to go back to making normal records again.

There were a few times when Tim and I had to accept that Tom was Mr Producer - at one point we took orders and popped round to the shops, RUEFULLY reflecting that this was (EXACTLY) like if George Martin had nipped into the Get Back Sessions and been sent out on the Sandwich run. Later on in the day, realising that we were about to sit through and hour of MASTERING (i.e. 60 minutes of saying "is that louder or quieter than the last bit?") we SNUCK OUT to THE PUB, where we were surprised to be served by Dave from Plans & Apologies. Sneaking out to the pub made the whole day feel oddly more like WORK to me!

When we'd mastered Regardez, Ecoutez Et Repetez we'd TESTED the master by getting into various CARS for a listen, which turned out GRATE - you get to NOT be sat in the same room you've been in all day AND get to hear it through fresh speakers. This seemed like an ESPECIALLY good idea to me this time around, not least because it is my FONDEST DREAM that this album will become the Long Car Journey Soundtrack of CHOICE for the next generation.

Our last job before getting in the car was to do the CDText - this is the thing that, basically, tells car stereos what the tracks are called, and seems to be the thing that people are MOST impressed by when it works, so we took IMMENSE care, with poor old Robbie having THREE middle aged spelling pedants overseeing his typing.

We'd got a table booked for CURRY at nine and, foolishly tempting fate, I'd been saying all week that we'd be in the car by 3pm and thus in the PUB by about half four. It was gone seven o'clock by the time the four of us squashed in to the Tiger Mobile, and GOODNESS knows what the other car park users thought when they saw the four of us sat there with the windows steamed up. STEAMY EXCITEMENT was pretty much the OPPOSITE of what we were feeling - after more than two YEARS of effort and tinkering we REALLY REALLY REALLY wanted it to all WORK this time around, there was a PUB waiting for us!

We emerged 50 minutes later all visibly RELIEVED but still a bit NERVOUS. It all sounded GRATE - but that couldn't be right, could it? We'd been so worried that we'd not really been able to ENJOY it yet. Everything sounded pretty AMAZING (and later listens would prove that it TOTALLY IS) but the PANIC of the situation had subdued us somewhat. We agreed that the mix was RIGHT, but that maybe some of the comparative volumes of tracks might need tweaking - Robbie reassured us that if that was the case it would be a dead simple job, and so we set off for the pub with our hearts lightened but still not quite believing that we'd DONE it.

We arrived at the pub to find Emma ensconced with Mr and Mrs Machine, and the latter sadly having to leave pretty much straight away due to BABYSITTING. The rest of us settled in for an extraordinarily pleasant evening, as seen below: 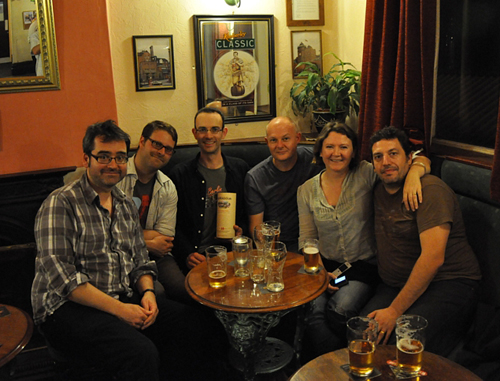 Aah, look at us all! It was LOVELY to be all back together again, especially as it was only a MONTH or so since the last time, rather than the MASSIVE GAPS we've experienced lately. We did the traditional presentation of The Producer's Whisky, drank each other's health, and had LARFS. 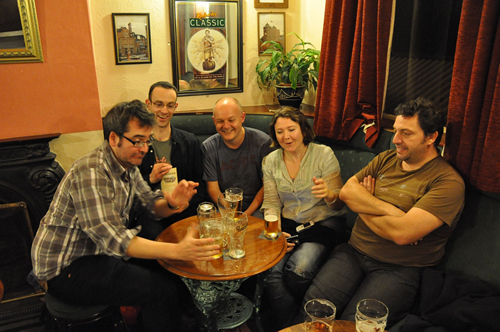 We popped over the road for BEER - sentimentally getting LECH, the beer we'd drunk in Germany - and i ALARMED Tim by saying this might be the last album we get REPLICATED (i.e. do over 500 copies of) rather than DUPLICATED (smaller runs) due to Modern Times and Downloading. He seemed to think this meant THE END OF THE BAND but I _think_ i managed to talk him down from THE ROOF and we then spent a very happy evening eating DELICIOUS Balti Curry and discussing ALL SORTS. Visitors from the future may like to know that it was on THIS evening that we agreed our NEXT project: the MJ Hibbett & The Validators Party Album (as suggested by Mrs C Gibb and The Sauce In My Balti on twitter this week) to feature songs such as "I Can See Clearly Now", "Saturday Night" and "Zoom". Emma agreed that it's her turn to PRODUCE. Watch for it in 2015!

It was thus a happy band of Validators who wandered off into the night, with me returning to Tiger Towers to watch Doctor Who and KINDLY help him try out his new whisky - another tradition of these recording sessions which, hopefully, will return whatever we do next.

Next day I came home and listened again to the album - it definitely DOES need a couple of tiny volume tweaks, but otherwise IT IS FINISHED! I can't WAIT to let people hear it, it is going to BLOW MINDS!!