I've just sent out the latest batch of press releases, this time TARGETTING newspapers and women's/family magazines. I've had loads of parents emailing me over the past couple of months to say that their kids love the new album, and I thought it might be an Interesting/Delightful news story. Well, you never know do you?

I think this is my MOST FAVOURITE of all the press releases I've ever done, just because re-reading it makes me HAPPY - this is pretty much EXACTLY the result I wanted for the album (well, maybe selling a ZILLION of them would be nice too), and when ALLIED to one of my favourite ever gig photos it cannot help but bring me GLEE. Here's the whole thing in full:

When indie band MJ Hibbett & The Validators released their new album 'Dinosaur Planet' they hoped for the usual things indie bands hope for - the approval of Steve Lamacq, a few more gigs, and maybe a slot at a festival. They didn't expect to suddenly find themselves with a following amongst the under-10s.

"I first noticed something happening a week after the CD came out" says lead singer MJ Hibbett. "Every day I'd check my emails hoping for reviews, and instead find messages from proud parents, telling me how much their children loved the album."

Matt Crisp from Birmingham was one of the first to get in touch, saying that his son Josh "insists that 'Dinosaur Planet' must and shall be played every time he's in the car". Ian Greenall of Merseyside wrote to say "my five year old son Ethan goes around quoting and singing from it all the time."

Some of these young fans are working to convert their friends too. Pete Shuttleworth of Kilmarnock reported that his daughter Millie "has imposed it on any child we give a lift to. Her best friend Euan was more interested in hearing the second half of the album on the return from a recent adventure than he was in the adventure itself."

In Croydon, East London, there's even a Dinosaur Planet playgroup! 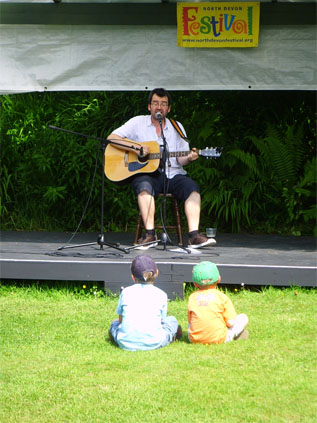 MJ Hibbett plays for some of his newest fans


'Dinosaur Planet' is MJ Hibbett & The Validators' fifth album. It's a science fiction rock opera which uses space dinosaurs and giant robots to talk about various adult topics. For instance, their current single 'A Little Bit' is supposed to be a hymn to the value of evidence-based academic research, but even that has been taken over by their new fan base.

"We asked our mailing list to help out by each doing 'a little bit' of the video," says MJ, "and when the clips came back nearly half of them featured children!" The results can be seen on their webpage, with various indie mums and dads happily singing along with their kids.

"It's a lovely thing to happen, and we're very glad to have made a record that parents and children can enjoy together", says MJ. "The only downside is that our new fan base can't get into our gigs. We usually play in pubs, and it'll be quite a while before they're old enough to get in!"

The video for 'A Little Bit' (direct link to YouTube)


Aaaah, isn't that lovely? I wonder if anyone will actually pick up on it? It's also available at http://www.mjhibbett.co.uk/under10s if anyone fancies a LINK to it or something, and if YOU, dear reader, would like to make this a GLOSSY MAGAZINE FEATURE, do let me know!