The Dinosaur Planet CAMPAIGN may have appeared to have quietened down a little of late, but like minds immeasurably superior to our own (although, to be honest, not very much like that) the CAMPAIGN TEAM (me) is drawing up PLANS - plans which took a big leap forward today when a hundred of THESE arrived: 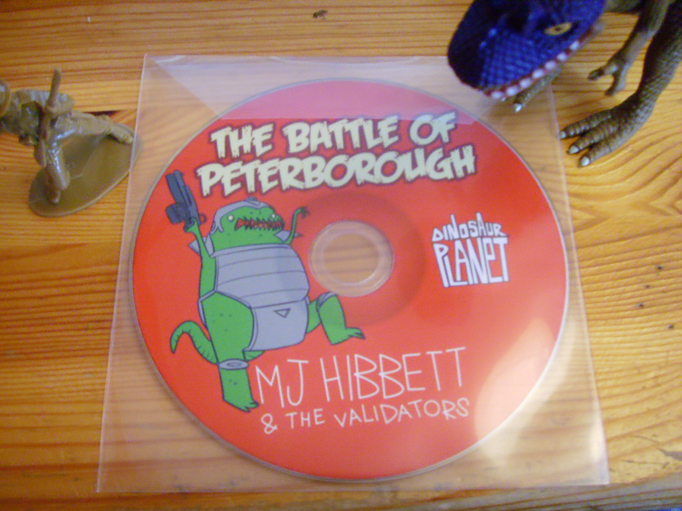 They're the PROMO SINGLES for The Battle Of Peterborough, which we'll be releasing as a FREE DOWNLOAD on May 28th, along with a REALLY REALLY EXCITING VIDEO. I've just put the finishing touches to this and, as promised, it does indeed feature some QUITE ASTOUNDING special effects. I'm hoping to put the video up a week or so before the "single" itself goes live, partly to Maximise Promotional Awareness, but MOSTLY because I'm so excited about it I can't really WAIT much longer!

The CDs, by the way, are just for sending out to radio stations and a few print media outlets - I haven't done this with any of the previous free downloads so I thought I'd see if this made any difference to airplay - so i WON'T be making them available for sale. If they DO work, however, and I end up doing a couple more, then i might do some BOX SETS of them later in the year.

For LO! there is more - MUCH more - to come, with at least TWO more videos in the works, a batch of Validators Gigs to play, a mini-revival of the STAGE SHOW in the Autumn and maybe some EDUCATIONAL OUTREACH too. As well as being an all round top notch PERFORMER, Ms J Lockyer also runs STORYTIME at weekends at The Green Dragon in Croydon. As part of the half-term excitement in June she's running two days (Friday 8th and Saturday 9th June) based on Dinosaur Planet, with stories, arts activities, workshops, music - THE LOT. It's all TERRIBLY exciting, and it's making me think about making some resource packs available to Schools,Youth Groups, Libraries - that sort of thing. Does anyone have any THORTS/IDEAS about the logistics/common sense of this? I've got scripts, songbooks, and copies of the artwork that I can give away for free, LOADS of CDs, copies of all of our videos and all manner of stuff like that, and I'd very much like to hear from people in the KNOW about whether that might actually WORK. I recorded Dinosaur Planet with the idea of it being HEARD, especially by KIDS, without really worrying about BOUNDLESS RICHES, and I think this might be a nice way of going about it.

I've also just had my CRB check through!

In summary then: watch the skies my friends, there is a DINOSAUR PLANET looming once more upon the horizon!

a Dinosaur Planet singles box set? that's Josh's Christmas present sorted! Fantastic idea. seriously, i've never downloaded a song in my life (i prefer to be able to hold it and go "look at that!" and our combination of rubbish computer / shocking broadband thanks to s*y probably wouldnt be up to it anyway) so a singles box set would be ace.
posted 3/5/2012 by matt