On Friday I met Mr T "The Tiger" McClure at Luton airport to join BERLIN STOLLEN-RAVE 2012: The Validators' now traditional pre-Christmas gig in Berlin. Mr F A Machine had begun it all MUCH earlier - he was to be found having a PINT in East Midlands Airport at 5am, THAT is how ROCK he is - but Tom and I were setting off at a much easier hour.

EXCITINGLY we discovered that Easyjet had SENSIBLY introduced pre-allocated seats, theoretically making the whole experience of flying with them less stressful. They still, however, had priority boarding, mostly it seems so you can get your BAG stashed. For LO! AMAZINGLY for an airline that charges you to put bags in the HOLD, these days nearly everyone takes them in the overhead lockers, so there ISN'T ENOUGH ROOM!

We stood in the RAMMED waiting room, jostling, while constantly called upon by announcements to volunteer to have our extra gear stashed in the HOLD. If we did that, apparently, we'd get priority boarding. But what use would that be, when we no longer had any bags to STASH? It was MENTAL.

Still, the flight itself was fine, and we arrived at the airport to find, once again, NO SIGNAGE. MAN! Everything else in Germany is so ORGANISED, but the TUBE has NO SIGNS to tell you what to do. HUGE CROWDS of travellers wandered the station looking CONFUSED, until a Kindly German told someone that we needed to go to an entirely different ticket machine to buy tickets for town. We ALL went in the same direction, and then Tom and I just followed people with wheely suitcases, as there were NO SIGNS to tell us what platform trains were going from. It was KRAZY!

Eventually we got the Double Decker Train (remembering to validate our tickets first - EVERYONE asked us if we had done this!) to town, got off the tube... and got lost again, going in totally the wrong direction. AT LAST we sorted ourselves out, got to the flat, rang the doorbell... and someone who wasn't Frankie answered.

It was all a bit of a confusing way to start the trip, but one phone call later we'd ALERTED Frankie to our presence and were soon in the flat. The area was all KEBAP SHOPS (German spelling) and the stairwell smelt ODD, but once inside our flat it was LOVELY, with HUGE rooms. We settled down to an afternoon tea of BEER and STOLLEN, which Frankie had kindly been out and GOT, before heading out again, this time for THE RADIO.

I'd had a text from Mr Martin Petersdorf that morning asking if we could go in to do a SPOT on Radio Eins, so of course said "YES PLEASE!" We got the U-Bahn over there and were STUNNED to see, on the TV In The Carriages, a big picture of The June Brides, advertising the GIG! We were OVER EXCITED to say the LEAST to then see a huge picture of US come up! We WHOOPED so loudly that everyone turned round to see what was going on, and we had to explain to a MAN that "That's US! Gig! Us!" 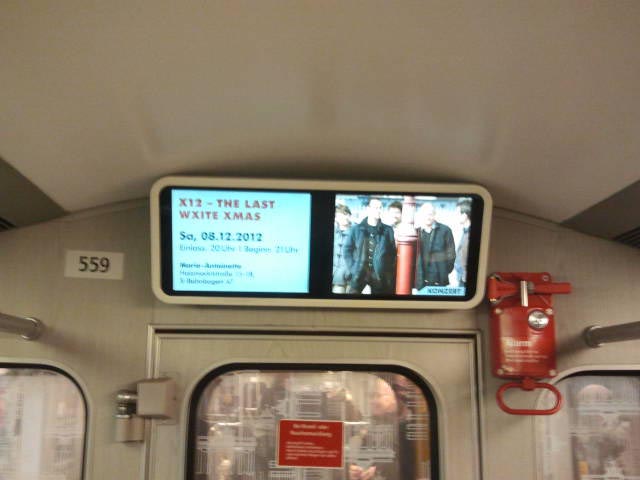 Full of high excitement we found Radio Eins and were asked to come back later, so went and found Martin, our organiser and Berlin Guardian Angel sat in a pub with Mr Phil Wilson, and LO! JOY shone around! There were BEERS and HUGS and then we were BACK at the studio for another try. Phil did a brief interview with the show's hosts - it was a bit strange, they spoke to him in ENGLISH first and then launched into an extended RANT in GERMAN. To begin with it sounded WEIRD like they were asking him questions then slagging him off in German, but thanks to some untranslated words we worked out they were repeating what Phil had said for non-English speakers. PHEW!

I went on next and made some REMARKS, then did a version of It Only Works Because You're Here which both Tom and Frankie noticed I was Enunciating Very Clearly. This was partly because I was conscious of having had a BEER (the radio station had a HUGE BEER FRIDGE full of FREE BEER stood right next to me, REMINDING me of this fact!) but also because I wished it to be clearly understandable by those who do not speak the LINGO as a first language like what I do. It actually made me CONCENTRATE and thus do a Pretty Good Version. It was nice - in fact, here's a picture of the other two ENJOYING it: 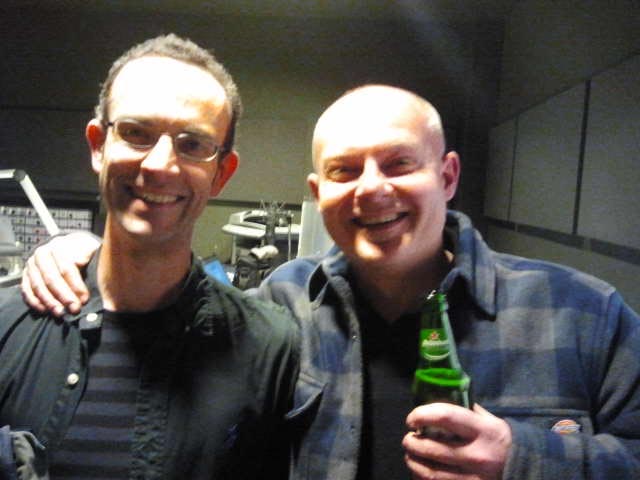 Job done we next headed off to Martin's local pub for some more BEERS also HIJINKS and then strolled round the corner to The Magnet Club. Derby band, and pals of Frankie, The Sons happened to be playing there as part of their TOUR. Frankie had seen it advertised but hadn't told them we were going, so it was HILARIOUS when we walked in to watch Lee Lad (the bass player) doing not a double but a TRIPLE TAKE of AMAZEMENT as his brain tried to process Frankie wandering in. It was AMAAAAZING.

We had a few more beers, enjoyed the band, and eventually piled out for the U-Bahn home. We were on it at about 2:30am and it was INCREDIBLY busy, also WORKING!

We got home (having popped round the corner for some PIZZA first) and were in bed just before 3am. Life on the road was working out pretty well!