I was awoken just before noon in Berlin on Saturday by the sound of Arriving Pattisons. Tim and Emma had set off at Daft O'Clock that morning so we were happily gathered for lunch (MORE STOLLEN) before striding out EN MASSE into a very very SNOWY Berlin. It basically snowed the WHOLE time we were there, it was COLD - here's the view from my window later that evening as PROOF: 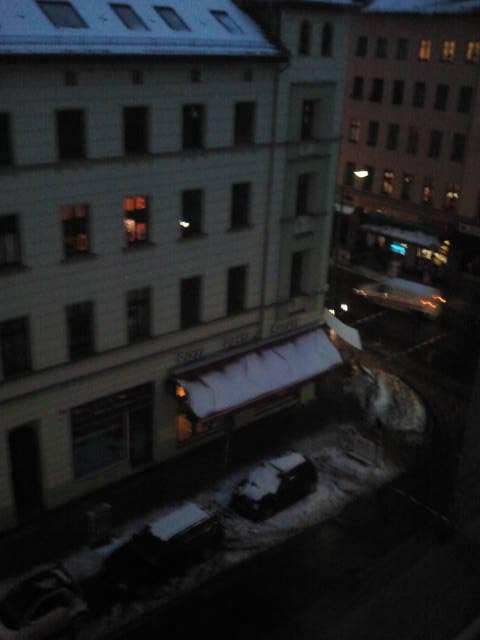 On the way we spotted our advert on the TV, and ended up staying on the train for the next time around, going TWO stops past our required station, just to get a picture. TOTALLY worth it!

After that diversion we went to a small Christmas Market, drank some GLUHWEIN (i.e. hot mulled wine, it was ACE) did a bit of sightseeing around the Brandenberg Gate (including a LOT of "Let's Pretend To Be Joy Division In The Snow!" photo opportunities) then walked down Unter Den Linden looking for a CIGAR SHOP, where Tom intended to buy some SCHNAPPS. Opposite this shop was a MIELE appliances shop, which led to some opinions being expressed about the merits of different kinds of vacuum cleaners. I bet that's the sort of thing D.Bowie and L.Reed used to chat about all the time when they were there. We also utilised their INCREDIBLY POSH toilets - it was so posh they didn't have paper towels, they had ACTUAL MINI-TOWELS. A couple of us later confessed to having considered NICKING one, but it seemed WRONG - the reason German shops can HAVE this sort of Nice Thing is that people DON'T go round nicking them. To spoil it felt RUDE!

Round the corner we went to a really nice pub that me, Tim and Frankie had happened upon the FIRST time we'd come to Berlin, then nipped back to the flat to refresh ourselves (i.e. eat EVEN MORE STOLLEN) before hitting the U-Bahn yet again to go to the GIG.

We were playing at a venue called Marie-Antoinette, tucked behind some OFFICES. Martin, Kati and The June Brides were already there when we arrived, but the soundman wasn't, so we took some refreshment in the form of tea and... well, some more STOLLEN, this time made by Martin's mum. It was DELICIOUS! We also tried to buy some beer, but the barstaff REFUSED. We would, apparently, get beer vouchers once the doors were opened, until then we had to wait. NO YOU CANNOT BUY ANY.

I got myself in a bit of a FLAP around this point, worried about borrowing GEAR (which was all fine in the end) and PANICKING GENERALLY - a couple of times I said things like "It's a shame to spoil a lovely weekend away with the annoyance of doing a gig" in what I thought was a LIGHT JOVIAL MANNER. However, it apparently sounded to some of The Vlads that I was saying "I hate gigs! Let us never ever, really seriously, ever do them again and in fact split the band." I wasn't saying that!

Eventually DOORS opened and in came Mr Rich Mayer, who I knew from A MILLION YEARS AGO when I (and also Frankie) were on the uk-indie mailing list. It was great to see him again, and it turned out that in the last NEARLY TWO DECADES he had not stopped being a lovely chap. PHEW!

Beer, music, chat and GOOD TIMES (feat. Michael Knight, who we'd played with at The Bang Bang Club three years ago and who now featured Martin on DRUMS) followed until it was our turn to go on. Here's what we played:

It all seemed to go pretty well - we had some BIG LARFS and the audience appeared to enjoy it. I only messed up twice, which is EXCELLENT going, and I very much enjoyed playing a gig where I could see THE RIVER directly out of the window! I could also see various people enjoying it - even people I didn't know who KNEW THE WORDS - and near the end someone shouted for It Only Works Because You're Here because they'd heard it on the radio and come SOLELY on the strength of that song. ZOINKS! AND I got to play a Gretsch guitar, which was LOVELY and unusually CHUNKY for an electrical guitar. Frankie played a FIVE STRING bass guitar, which he coped with MANFULLY - it was, in fact, good times all round, as you can see by these rather ACE pictures taken by Mr Heimo Reifetshammer: 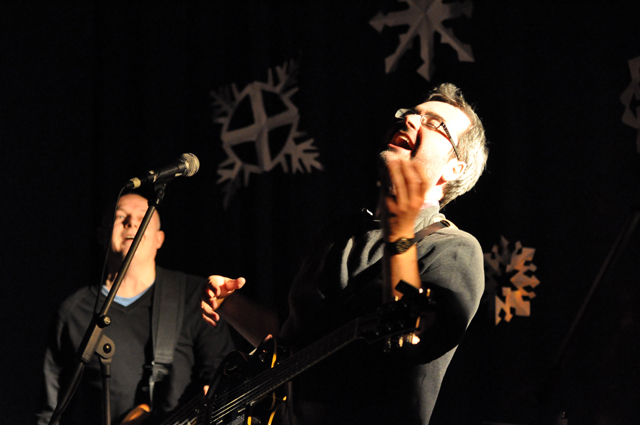 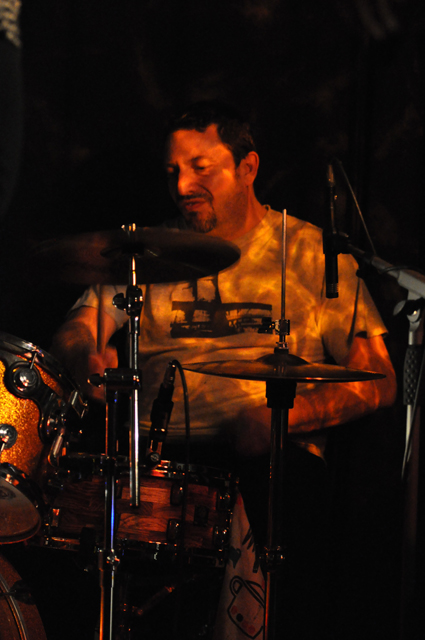 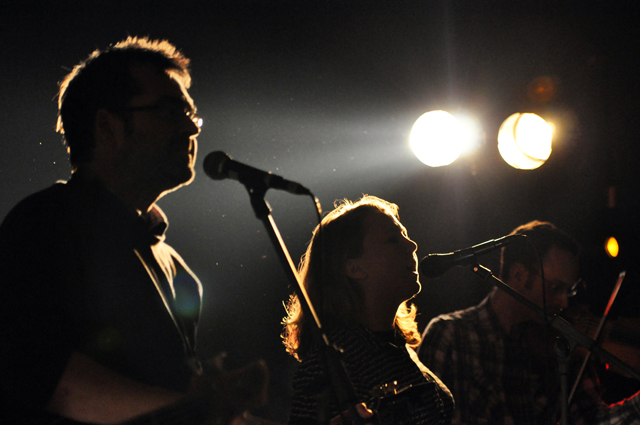 After us was the ever delightful Mr Eddie Argos, playing with a SINGLE GUITARIST. To be honest he could probably just do gigs entirely acapella, SUCH is his IMMENSE stage charisma and general EXCELLENCE. He stood in front of the stage and did BASICALLY POETRY and was AAAMAAAZING! HOORAH!

And then the evening finished with the GINORMOUS sounds of The June Brides, who were just BRILLIANT. As with the last time I saw them, in That London, they seem to have COMPACTED their sound into a huge blast of ROCK, they were IMMENSE and LO! the crowd went wild!

For some reason what happened next is a bit vague - I think we had some more beer? And then got the tube home? It's all a bit hazy - although I do definitely recall at the end of the evening Tim insisting we open the bottle of CHAMPAGNE... and then falling asleep where he sat! Before that we had another beer, some more STOLLEN (of course) and then for some reason videoed us all BELLOWING "Do They Know It's Christmas" on Emma's phone. For some reason she REFUSES to put this video online - I cannot for the LIFE of me understand why, it sounded GRATE at the time!

Our revels ended, once again, just before 3am and we all went to bed, tired but very happy. Playing gigs in Berlin is ACE!