Our final full day in Berlin began, once again, just before noon, with surprisingly little HANGOVER. I've found this before - German beer is done to PURITY LAWS so doesn't have the CHEMICALS that ours does, and the fact that we'd mostly been drinking out of bottles meant we weren't victim to Night Club Pipes like back home. AND, obviously, having a big LIE-IN every morning certainly helps.

After breakfast (feat. STOLLEN) we headed into town, going to a MASSIVE Christmas Market near Alexanderplatz. There was YET MORE Pretending To Be Joy Division and then we had the Christmasiest time EVER wandering around the market. I mean, LOOK at it! 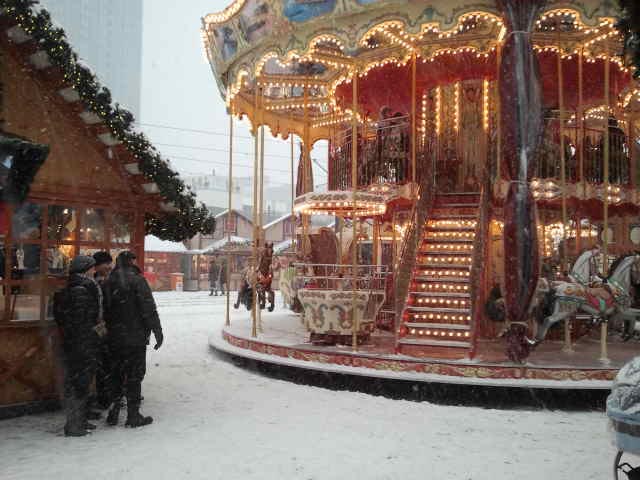 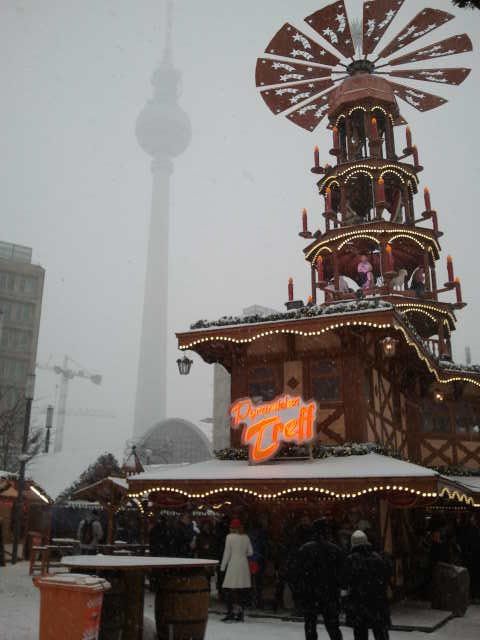 Shortly after taking these pictures the five of us regrouped to stand underneath that windmill thing, drinking mulled wine in the SNOW while listening to Christmas Songs. Just when it felt like things couldn't get any MORE Christmassy a horse-drawn carriage went by carrying a brass band playing MORE Christmas songs, followed by a parade of SANTAS!

They're good at Christmas, The Germans.

Tim and Emma went off for some Christmas Present Shopping while the rest of us did some BEER shopping, then went round the corner to visit The Museum Of Things. The name ALONE was enough to entice us, especially as it was just around the corner from our flat, but I would HIGHLY recommend it to anyone, as it was ACE! It's a floor of an apartment building full of glass cabinets, showing the progression of DESIGN, especially with regards to the WERKBUND, a German Organisation set up to promote good FORM and DESIGN. It explains a LOT of things about Germany (e.g. the cheese slices fit the bread EXACTLY - why wouldn't they?) and was FASCINATING. There was an exhibition of ART by Matias Bechtold who'd taken everyday objects and transformed them into models of FUTURISTIC HOUSE and SPACESHIPS which - for once, ACTUALLY doing it - totally DID make you look at all the other objects afterwards in a different way.

Our minds were BLOWN! We then went to a comic shop, failed to get into a record shop (it had closed), nearly got hit by SNOW due to some YOUTHS throwing snowballs at a BUS, and found a CURRY restaurant nearby. AHA!

Back at the flat the Pattisons arrived and, girded with BEER and, of course, EVEN MORE STOLLEN, we sat down for a BAND MEETING. If the Germans know how to do Christmas then we, The Validators, know how to do band meetings. CRIKEY! The agenda was STUCK to, points were RAISED, issues were DEALT with and we had over two HOURS of DISCUSSION. I can't reveal ALL of the Action Points (one is to do with a SECRET THING for next year) but amongst the decisions was Tim's ASCENSION to Official Booker Of Festival Gigs, a whole NEW way of doing recordings and, indeed, RELEASES in the future. It was all very exciting!

We finished off the evening with a trip to the curry house, which was very nice if perhaps a little SALTY, then headed back to the flat for a surprisingly EARLY NIGHT, ending up all tucked up in bed by eleven o'clock.

This was SENSIBLE as we were up at half six to PACK and set off home again. After a bit of a PANIC when Tim thought he'd lost his car keys (he hadn't) and our train to the airport being a bit late, everything else went FINE. Soon we were back at Luton airport in Baggage Collection saying our FAREWELLS and then onto our respective transport choices home. On the train, just outside St Pancras, I saw this out of the window as we slowed to a halt to wait for a platform: 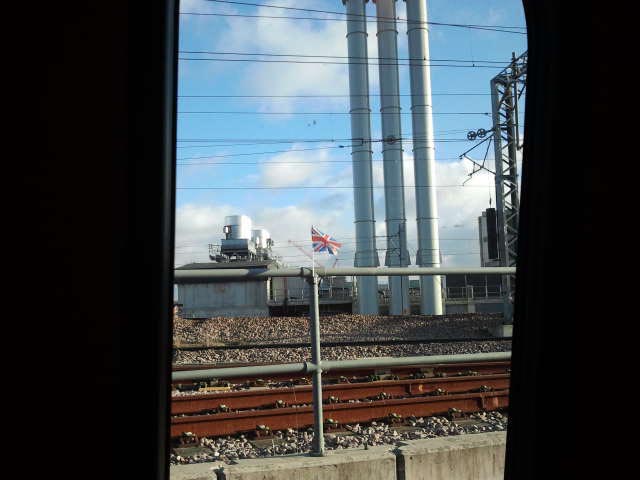 I don't know why, but for some reason it moved me greatly! INDEED the whole weekend did - once again we had an absolutely LOVELY time, having adventures, messing around, making REMARKS, meeting delightful people, doing a gig, having some beers and eating a TONNE of STOLLEN! It was all due to that HERO amongst men, Mr Martin Petersdorf, for booking us, so let us publicly say THANKS MARTIN! It was BLOODY GRATE!