Two entirely seperate FUTURE DEVELOPMENTS were in progress yesterday, spanning (some of) the entire (nearly) length of our NATION.

Here in London's famous LONDON area of London Mr S Hewitt and I were working on our official registration for Total Hero Team at this year's Edinburgh Fringe Festival. We've now got details of our VENUE and an offer of DATES for this year, so all that remained was to debate our BLURB, our PICTURE, and Various Other Elements Of Registration. It's a simple, yet also Oddly Complicated, process, which I _think_ we have now completed. Here's the BLURB we'll be using:

This'll appear in the massive BROCHURE, alongside this rather lovely picture: 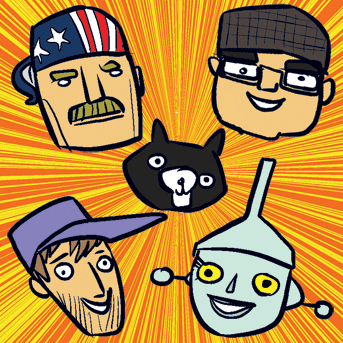 Meanwhile, between London and Edinburgh in bucolic DERBY The Validators were back in the studio, recording basic tracks for "I Want To Find Out How It Ends", the THEME TUNE we're doing for A Brief History Of Time Travel. Reports indicate that the session was, and I quote, "GRATE" - the main theme was recorded, with some EXTRA BITS in it, along with several Instrumental Interludes. Once I get a rough copy of all this I'm going to do my lead vocals, GUITAR SOLO (OH YES) and whatever extras need to be done, then that'll go back to Derby for gluing together, the addition of Emma's vocals, and any extra BITS. Then we check it, mix it, and HO! we have a theme tune!

As well as these being used in the Podcast series ITSELF the current plan is for the theme tune, and an EP containing all the instrumentals, to be given to people who reached various GOALS in the Kickstarter Campaign. In addition to this, if the songs works out well, we're thinking we MIGHT release it as a single too when the show is released. We'll have to see how it goes, of course, but it does raise the tantalising prospect of doing a VIDEO too!