I've got an IDEA on the go at the moment that is making me all EXCITED, so much so in fact that last night I had to retreat into a different room and do a SMALL DANCE. That's Quite Excited!

The idea EMERGED last week when I SWANNED into London Town for a couple of MEETINGS. The first of these was with Mr J Dredge, during which we worked up some THORTS for sketches to send into Newsjack, which is starting again this week - the first episode is on TONITE in fact, so fingers are very much crossed for getting something IN. After that I wandered into Soho and met Ms E Morgan, late of SCHOOL, for a talk about SITCOMS. We'd spoken about an idea of hers a couple of weeks ago, and I was VERY pleased to have another chance to talk about it some more, as it is a GRATE IDEA - it's basically about a BAND, which is something I know about, and we had a delightful time talking IDEAS. The only thing about it that made me slightly sad was that it was SO MUCH BETTER than the vague idea I'd had to write a sitcom about bands. It made mine, in fact, look a bit rubbish.

This was especially disheartening a I sort of NEED to write some sort of original sitcom script. Since Hollywood got CANCELLED I've been very much back on the BBC Radio PLAN to become a Proper Professional Writer. The idea is that you start by submitting sketches to Newsjack, then gradually work your way up until you get to have a meeting with a producer and PITCH your own sitcom idea at the them... and I don't have one, not least because I spent such a HUGE part of this year writing TWO scripts for other people's sitcoms which are now not really any use to me. I said this out loud and Emma said "Well why don't we think of one then? What are your PRECINCTS?"

I sat and had a thought and came out with the usual first ideas I have - comics, being in a band, science fiction etc etc, then at the end said, "And, obviously, I worked in University departments for 22 years." Even as I said it LIGHTS started going on in my brain. "There you go", said Emma and there indeed i DID go. My BRANE had cleary been WAITING for this idea because all the way home it kept saying "And what about THIS story? And this Unusual Character?" Working in University departments for 22 years involved meeting a LOT of VERY Unusual Characters!!

I let these THORTS stew in my mind over the weekend, and then on Wednesday sat down for a proper THINK. I wanted there to be a character a bit like ME in it (i.e. someone who'd worked there for DECADES pretending they were only there temporarily), but every time I tried to think of it I pictured Roy from The IT Crowd. I also had an idea for someone based on Marjorie who I used to work with, but could get no further. I had a look at the webpages of a couple of my old departments and was AMUSED to find that although NONE of the admin staff were still there nearly ALL of the academics were, and that half of them were now PROFESSORS! The only one that wasn't was a woman who appeared to STILL be doing the same PhD she'd been doing when I worked in the office next door to her, 20 years ago, and ALL OF A SUDDEN the whole thing fell into place.

I LEAPT into action* (*sat down on the sofa with a pad and pen) and started drawing out a COMEDY DIAMOND. This is something we were taught on the course by guest lecturer Mr Keith Lindsay, and ISN'T a precious gem that remembers Wagon Wheels, but rather a way of describing and devising Sitcom characters. I won't go into it in HUGE detail because, well, he does it better and also CHARGES people to be taught it, but the basic idea is that any sitcom can be described by putting the main four characters into a diamond where each side both opposes and reflects the other. For instance, in Dad's Army you've got Captain Mainwaring and Sergeant Wilson as opposites (in terms of class) and alike (they're both officers) while Pike and Jones are opposites (young and old) and alike (not officers). You go into a lot - a LOT - more detail than that, making opposites and similarities between all of them and then GETTING PSYCHOLOGICAL about it in the various further steps, but that's the general idea. He proposes it as a TOOL for working out which characters you NEED.

It is a GOOD TOOL, so good in fact that I did it as a DOUBLE DIAMOND for my show, which is obviously called "The Department". Here is how it looks so far: 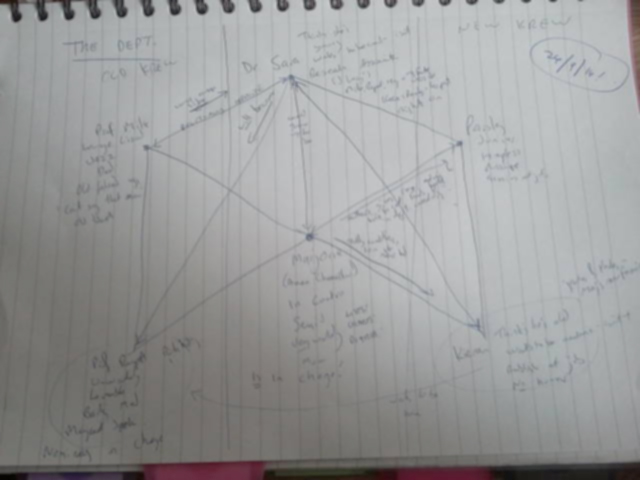 It may not look like much at the moment, but it was the start of my BRANE going into OVERDRIVE. You know when Famous Celebrity Authors say "Oh yes, it is always fascinating when the characters start talking to you"? Well it was sort of like that except they started DOING things and ARGUING with each other and BEING IN STORIES. It was amazing! All of a sudden this whole world of STUFF appeared, LO! as if to say unto me "Mark! Here is the thing you're going to be thinking about for the next few months!" and I did get A BIT EXCITED and have to go off to do the DANCE that I mentioned at the top.

It reminded me of the rare occasions over the years when I've written a Good Song* and KNOWN it (*"Good Song" on this occasion basically means "a song that I will be playing at pretty much every gig for the next ten years, knowing it'll usually go down OK). Examples of this are Easily Impressed, The Lesson Of The Smiths and It Only Works Because You're Here, all of which I have done a MILLION times safe in the knowledge that they'd be OK. With each of them I knew that they were KEEPERS as soon as I'd written them (NB if this sounds big headed please be aware that it has happened about SIX times in 20 years of ROCK!) and I got the same sensation with "The Department". I could be wrong - it's a whole new AREA after all - but it felt GOOD.

Now all I need to do is think of three HILARIOUS stories for the first episode, write it, get it commissioned, and then RAKE IN THE CA$H! What could be easier, right?

Scene: Charidee day in the communal kitchen everyone lays out their home-baked wares. That one mouthy prof who keeps banging on about how GRATE he is in all things culinary STRIDES in and is complimented by all on his EXCELLENT cottage pie. The joke is that it was his signature cheesecake.
posted 25/9/2014 by Ray

The character who "works from home" every Wednesday presumably makes an appearance?
posted 25/9/2014 by Fwankie

Ray: TOO UNREALISTIC. As if that could ever happen! Rob: Definitely. Gary: "A Very Peculiar Practice" - I loved that show!
posted 25/9/2014 by MJ Hibbett

What was that tv series where Peter Davidson was " a total abstainer"? Set in a fictional university
posted 25/9/2014 by gary urquhart