Blog: Rehearsal Room Of The Stars

Wednesday evening found me back at Theatre Delicatessen rehearsal rooms (aka The Old Guardian Building) in leafy Farringdon, this time to have a practice and bit of filming with Mr S Hewitt.

We'd arranged the practice a few weeks ago in order to maintain our MOMENTUM for Hey Hey 16K, which is a fancy way of saying "it's a desperate attempt to try and remember the lines before the next show". Usually we book a two hour rehearsal slot and leave just after an hour, as that's how long it takes to say "hello" and then go through the show, but this time we had another job to do. For LO! we had had TWO (2) emails from people asking us to upload a trailer video for the show to their website and, as Steve pointed out, there are several other places we could send such a thing once complete, so took the opportunity to actually USE our booked time!

We started off with a run-through of the show itself, which was not without incident. As usual we had a couple of self-inflicted stoppages, when we halted and tried different ways of doing History's Re-Written and Programming Is A Poetry For Our Time (both of which, we think, are sorted), but the biggest stoppage was from an outside source.

We were halfway through We Did It Anyway when Steve was distracted by events in the corridor outside. This had happened a couple of times before - there were several IMPROV groups doing their ghastly thing in other rooms, and also people cycling in the corridor for some reason - but THIS time there was a woman gesticulating to Steve through the window beside the door. She persisted, so we stopped and Steve waved her in, and she asked to borrow chairs. "Of course!" said the ever ebullient Mr Hewitt, expecting her to pick up a couple and go, but she then strode in and waved a long line of people in to collect pretty much ALL the chairs! The others did look very shamefaced about it, and as they shuffled in and out I noticed that one of them was Dan Starkey i.e. STRAX from out of Doctor Who! "I'm a big fan!" I said as he went past me, and he smiled nervously and said thanks. It was VERY exciting, especially after I'd seen Nick Wilton only the day before!

They went, shut the door, we carried on with the song... and then the woman BARGED in and got some more chairs! This, i felt, was A BIT RUDE. She'd seen (and also heard) we was SINGING and hadn't waited for us to stop the first time, which was IMPOLITE i thought, but to just come MARCHING in a second time without even knocking was, I feel, NOT GOOD MANNERS.

Anyway, we recovered, finished the run-through, and then moved onto the FILMING section of the session. I'd written a script (based on our press release) and we sat and did it like two newsreaders, THUS: 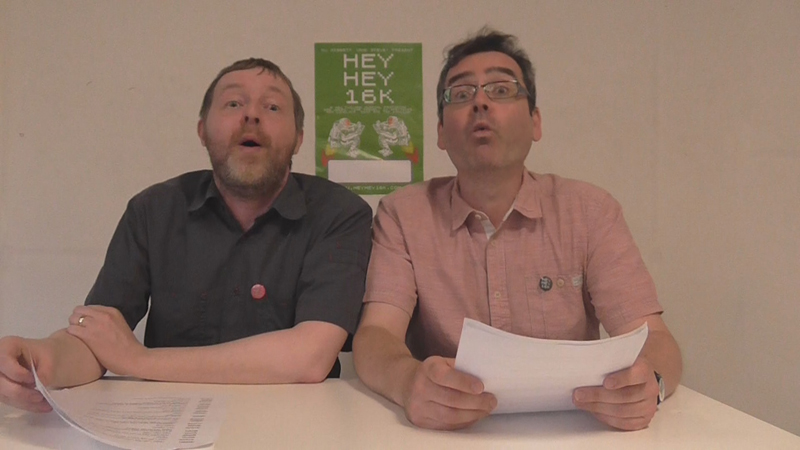 ITN News! We are available for work! We also filmed a bunch of inserts and wotnot, it was JOLLY good fun, and we STILL managed to wrap up with ten minutes time left to us. I wish rehearsal studios gave CHANGE, we'd've had several free goes by now, but I guess when you go to a place that provides sightings of a beloved children's TV comedian one day and an actual SONTARAN the next you can't complain too much!