Blog: Tim At The Roundhouse

Last Wednesday night myself and The Acts On My Bill went to the Camden Roundhouse, officially to see Mogwai celebrating their 20th Anniversary, but ACTUALLY to see Mr T Pattison of this parish on a MASSIVE stage playing to THOUSANDS of people as part of the revived Prolapse.

I was expecting it all to be much the same as a few weeks ago in Dalston, with a room full of people I knew, but in fact the ONLY people I saw for the first half hour were Mr D Forbes and Ms C Pop, both of whom were also there for Prolapse. We DID see another band though, the support act who appeared to be covering Music Of The Future and being Quite Serious about it. "It's like Yoga Music" said The Sun In My Salutation.

We found our places and then the most exciting thing of the whole evening happened: Tim came out to set his drums up so we shouted "TIM!" and waved. He saw us and waved back - I don't know why but I found this entire experience AMAZING! Goodness knows I have waved to Tim on stages ENOUGH TIMES (usually adding "Do you want a drink?" afterwards) but it felt SPECIAL doing so in such a huge venue as part of a massive crowd. Look, here's a picture of him in ACTION: 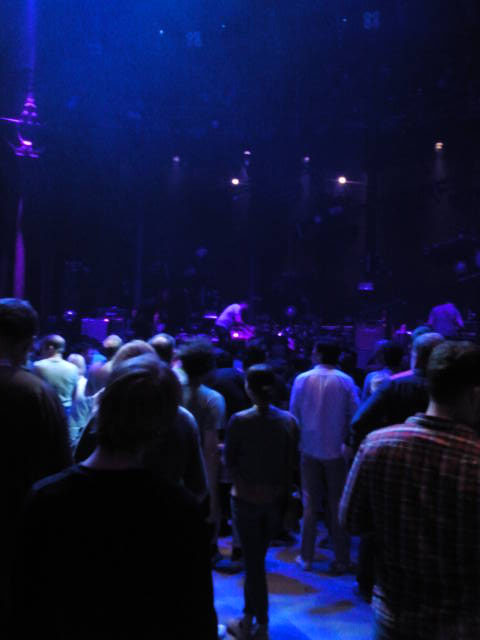 Shortly after this we saw Mr and Mrs Machine wandering past looking for us, so after some more shouting and waving we were all united, and all Quite Excited about the ROCK that was about to occur. A few minutes later the ROCK very much DID occur, as Prolapse came onstage and were FRANKLY AMAZING. Here is an action shot of that happening: 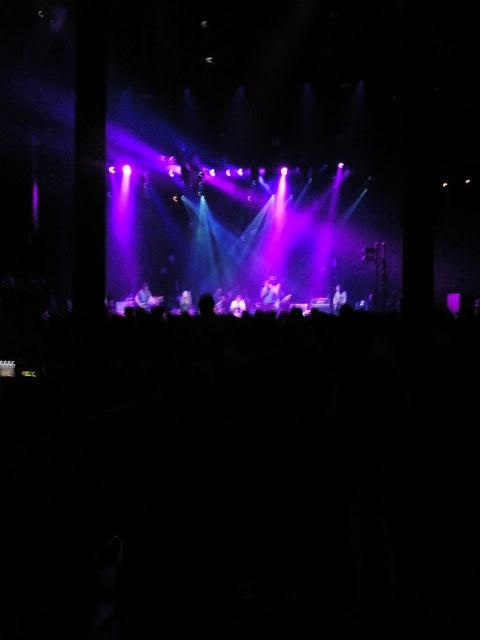 I should really be working as GIG PHOTOGRAPHER shouldn't I? Come on Melody Maker, CALL ME!

In all honesty I preferred the gig at The Victoria as it was a) smaller b) longer c) louder and d) more full of old chums GRINNING, but it was still pretty KRAZY to see them playing somewhere so IMMENSE. However it WAS a bit odd to see people just wandering in and out of the room as if it was just some random support act or something. I wanted to shout "OI! Stop going to the toilet and/or bar and watch this, this is GRATE!" Linda introduced the last song as possibly "our last ever", but surely that can't be allowed to happen?

Afterwards we found Mr D Dixey for another chat, and then, I thought, it would be time to go home. However, much to my surprise, it turns out that The Repetitions Of My Beats now likes Mogwai, so we stood and watched a good old chunk of them. Personally I've never really been into them, but she really liked it - she is, after all, significantly more ROCK than me, so maybe that's the reason?

Anyway, it was a pretty darned MAGICAL night and hopefully not the last time we'll see Prolapse in action - come on, Mr Stewart Lee, book them for ATP next year!