Blog: The Trials Of Film Making

On Saturday I was back in London's Farringdon district of London to meet Mr John Dredge for a bit more FILMING. We've recently been working on an idea for a webseries about two blokes sharing an office, tentatively titled "Monday To Friday". John had suggested that we film a PILOT for it, just to see if it worked. SPOILERS: it DID work, but crikey it was NOT easy.

The first issue we faced was the LOCATION. The idea of the series is that they're in a really tiny room, but when we arrived at Theatre Delicatessen it turned out that we had booked the BIGGEST room available! It's very busy there on a Saturday lunchtime so we'd not had much choice and, after a bit of thinking, we came up with a solution. We shoved two desks up against one of the doors and then LUGGED some handy items (a huge mirror and, I think, a table top) over to create a WALL, propped up with chairs. Here's what it looked like from the outside: 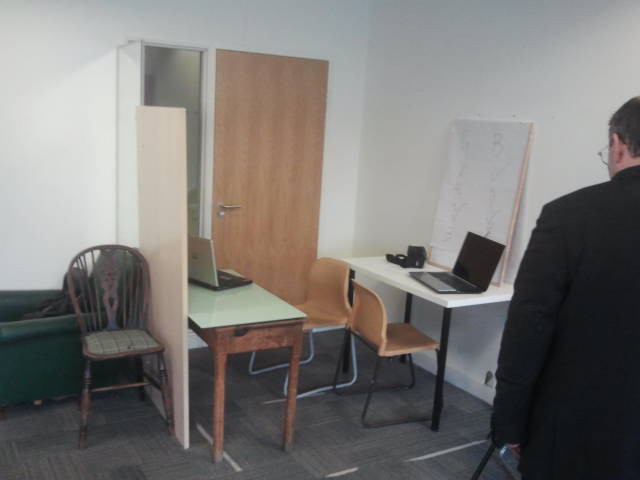 And here's what it looked like when we actually FILMED it: 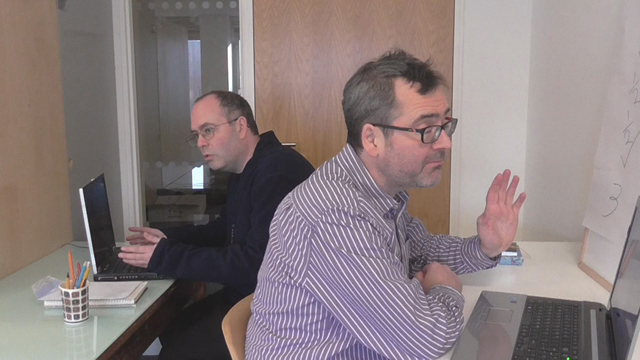 CLEVER huh? We were RATHER pleased with ourselves about how CONVINCING it looked! Thus chuffed we sat down to start rehearsing/filming only to come up against our next problem: the NEIGHBOURS. Theatre Delicatessen was, as previously stated, BUSY, mostly with ACTORS in large groups SHOUTING. They bloody LOVE shouting, do actors - I remember approx 1 MILLION years ago when I was a student at Leicester Poly's Scraptoft Campus (now, as with all things Leicester, Not There Anymore) being surrounded by acting students who loved nothing more than SHOUTING all the time. Later when I WORKED there we had to keep going out to acting lecturers and ask them if they could keep their SHOUTING Classes (it had to be taught too) inside the lecture theatres, rather than taking them outside to the corridors or indeed RIGHT OUTSIDE the rooms where other people were having exams.

ANYWAY, there was a lot of shouting going on which came RIGHT through the very thin walls, which made it a bit tricky to get decent SOUND. We had a couple of goes, almost having to shout ourselves to be heard over the DIN, but realised that most of what we'd done wouldn't be usable. At this point we found another problem - my digital four-track, which we use to record the AUDIO, had run out of batteries! We agreed that I might as well pop out and get some more, hoping that by the time I got back the actors might have quietened down a bit.

Fifteen minutes later i was back to some GRATE news - the actors had gone off to do the only thing they like MORE than shouting i.e. EATING SANDWICHES! With new batteries and a bit of quiet we had the perfect opportunity to film as much as we liked, and it was at THAT point that the camera ran out of energy!

Luckily I'd brought the charger with me but there were no plug sockets ANYWHERE in the room! We ended up standing in the corridor for ten minutes, nervously waiting for the camera to get charged up enough for another couple of takes while watching out (or rather, listening out) for the return of the SHOUTING ACTORS. We waited as long as we dared before DASHING back, where we got to do approx 1.7 takes of the scene again before the camera battery ran out again.

It was all a bit of a TRIAL, but turned out to be worth it when I got home and found that the last thing we'd shot was actually PRETTY GOOD. I'm not sure whether we'll actually USE the stuff we shot for public consumption, partly because some of the sound's a bit quiet and partly because Theatre Delicatessen is closing soon so we'd have to shoot other scenes somewhere else anyway, but we do have a PLAN. We're going to use it as an ACTUAL Pilot, and send it to some people who might be able to make it INSTEAD of us. Production companies LOVE the idea of Web Series, as far as I can see - they always seem to be on about it being The Future - and we have THREE whole scripts finished with a ton of ideas for more. As John and I discussed this plan I was filled with joy at the idea of us just being able to turn up and BE in the films, rather than worry about locations, sound and vision. As we'd discovered that day, all three are DIFFICULT!