Last weekend The Art In My Gallery and I went to see some MODERN DANCE, because we are well sophisticated like that and also because it was only round the corner from our flat so not to do so would have felt RUDE.

The Performance was called BLOCK, by NoFitState and Motionhouse dance companies and it was QUITE a thing. It started off with a huge pile of massive grey blocks piled up into a sort of CAVE arrangement which the dancers clambered over, bent over backwards looking like insects. They then proceeded to spend about 40 minutes LEAPING about, throwing each other across huge spaces and clambering into teetering piles of blocks in a mixture of DRAMA SCHOOL and CIRCUS SKILLS.

It was actually DEAD impressive as they flew around all over the place, and also SCARY when they clambered onto not very stable piles of blocks, especially at the end when they built a giant JENGA tower about 20 feet high and were all jumping around/into/off it. At one point the sky grew dark and cloudy, which was very atmospheric but a bit worrying when a WIND whipped up and started shaking the blocks! 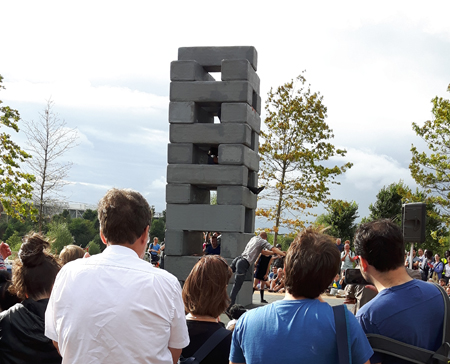 I wasn't sure what was going on - I THORT it was something about mankind developing, also society and cities - but I must say I rather LIKED it. It was, as I say, impressive but also quite ENGROSSING, and it certainly drew a great CROWD to that corner of the Olympic Park. I always get a bit uncomfortable when you see DANCERS doing "acting" (in much the same way as OPERA SINGERS do) but that was more than made up for by all the jumping and FLYING. I'm not sure we were supposed to burst into applause for individual feats of athleticisim, but some of it was SO amazing we couldn't really help it!

I wouldn't say it made me want to go and see MORE Modern Dance, but it was certainly fun to watch. Having said that, if you see me THROWING Steve through the air in our next show, with him doing double back flips as he flies, then you'll know where the idea came from!