Blog: Now For The News Where You Are

As part of the ongoing PROMOTIONAL CAMPAIGN for Storm House (still VERY much available as a Kindle ebook or paperback, by the way...) I have been trying to think of EXCUSES to get myself mentioned by various outlets. A couple of weeks ago I had a BRAINWAVE: I could send a press release to my old local newspaper The Peterborough Telegraph and point out that they had spotted my MIGHTY TALENT several (32) years in advance when they had given me an award for Peterborough Young Writer Of The Year!

I thought that this would be EXACTLY the sort of story local papers like, and my suspicions were proved CORRECT as I ended up doing a WIDE RANGING telephone interview with one of their reporters and then last Tuesday got myself SHAVED and WASHED so that The Ads In My Classified Section could take some PICTURES of me. They'd specifically asked for one of me TYPING so we did that and a couple of other Local-Newspaper-type shots and sent them off, along with a scan of the original story, what I reproduce here for you in full: 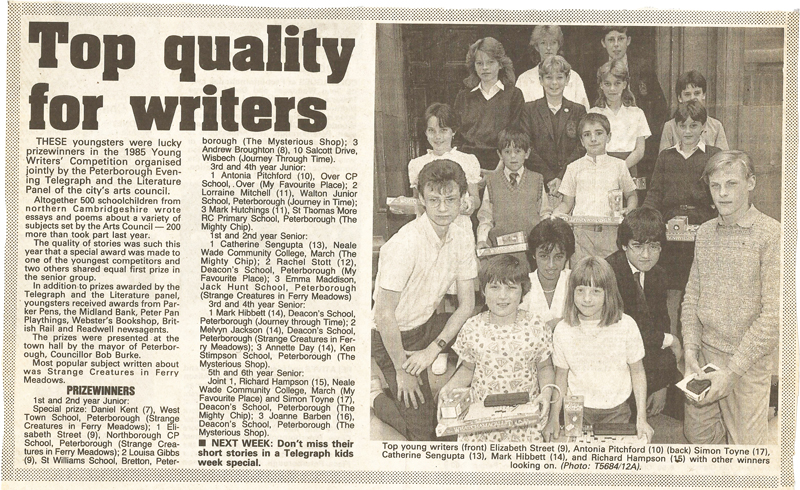 On Thursday morning I got a Facebook message from an old SCHOOL CHUM to say they'd seen it, and then further similar tweets, emails and phone calls came through from various Peterborough Dwellers. It was all very exciting, made even more so a couple of days later when it popped up on their website, which led to FURTHER chums getting in touch and/or swapping SCURRILOUS stories of that time when through NO FAULT OF MY OWN I got really drunk at The Peterborough Beer Festival in 1989.

It was all HUGE fun, even though it has not given a PARTICULARLY huge boost to sales - I guess I shall just have to find it within myself to enjoy the fact that my GRINNING FACE has once more ILLUMINATED my home town for its own sake. Some people might enjoy this kind of showing off, for me it is just something to be BORNE with BRAVERY.

I wonder how I can get them to put me in again?