Blog: I Have Seen Star Wars And Have Opinions

I've spent the past few days nervously NOT looking at anything on the internet that had the word "Star Wars" anywhere near it, as I was determined to go in SPOILER FREE. I did see a couple of mentions of it being "surprising" and "not what you expected", but was doing quite well until Mr FA Machine emailed The Band to see who wanted to talk about it. I didn't want to miss out on BAND CHAT, and was pretty sure I wouldn't be able to hold out for much longer without gaining Unwanted Knowledge, so yesterday I booked the afternoon off and headed down to the Odeon on Tottenham Court Road to see it.

For those who have as yet remained unspoiled, there now follows a picture of The Validators to give you time to look away! 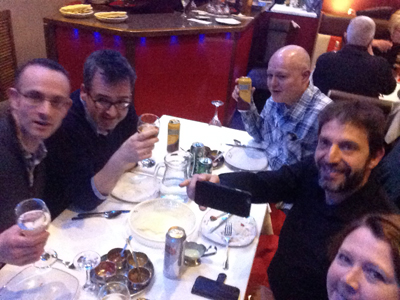 The Odeon Tottenham Court Road is not what you'd call a Good Cinema by any stretch of the imagination - it's tiny, it's cold, and it's not exactly PLUSH - but I do have a soft spot for it because it's where I've seen MOST of the Superhero and Sci-fi films that have come out since I've lived in That London. It's been handy for my WORK for most of the time, which means I've been able to go at non-peak times and enjoy it in aN uncrowded room in the company of my peers i.e. other middle-aged IT types. This was VERY MUCH the audience when I arrived early for the 2pm showing yesterday, and we all enjoyed the same BITS together with Light Chuckles. It was lovely!

The film itself was GRATE. My only slight disappointment was that it wasn't as Different and Groundbreaking as I'd been led to believe, although that did mean I spent the whole film CONVINCED that ANY of the characters could die AT ANY MOMENT. This made the bit with Finn and The Giant Space Cannon VERY TENSE INDEED for me!

My favourite bits were a) anything with Rose in it (she is THE BEST) and b) the whole story of Rey's parents. MAN ALIVE but I was pleased about that - I HATE it in fantasy/sci-fi when characters are FORETOLD DESTINIES and SECRET PARENTS and INHERITED POWERS. It is an entire narrative which says that the only worth these characters, and by extension ANY of us, have is nothing to do with our own actions, but instead comes SOLELY through our parentage. It is basically a TORY version of heroism and it WINDS ME UP NO END! Having a character find out that her parents were nobody famous, and that her destiny is HER OWN is a fantastic message to the 99.9999% of people in the Universe who do NOT have Space Warriors or BLOODY WIZARDS for parents. More of this sort of thing please!

Other things I loved were Luke Skywalker's last words, every time that Adrian Edmonson and ESPECIALLY Domhnall Gleeson were on screen (the "can you hear me?" bit was MEGA BRILL), all of the JOKES (so many jokes!), and the way the film goes "Yes, these PORGS are LUDICROUSLY cute. We know it, you know it, let's ENJOY it!" Oh, and also Finn getting to kill his Evil Line Manager. HOORAH!

In fact, I think I'm enjoying it now, the next day, even more than I did at the time. This is very handy because, as is the way of my people, I will almost definitely be watching it MANY MORE TIMES!