There was a time, long ago, when I didn't change employers very often. I worked for Leicester University for about 11 years then made a massive leap to London and worked for Birkbeck for 13, but then after that I worked (not very successfully!) for myself for about 18 months, then had a year at Imperial, then another 18ish months at UCL, and NOW I'm at UAL!

The downside of all this chopping and changing means that I have to keep on LEARNING how things work, but the UPSIDE of it is that at least I'm USED to it now! When I started here I knew that I'd be meeting lots of new people, would have to do various online training for fire safety and so forth, and that I would, at some point, be officially WELCOMED to the University.

That welcoming happened this very week - astoundingly quickly, as I've only been here a couple of weeks and it usually takes MONTHS to get round to - with me spending a Surprisingly Enjoyable morning in High Holborn alongside about 30 other new and new-ish starters. I say "Surprisingly Enjoyable" because usually these things are DEADLY DULL but, as I am finding out a LOT at the moment, being at an Arts Institution means they do things a bit differently. For instance, we had a talk from a Vice Chancellor who merrily ran off script to make Political Remarks in an Actually Entertaining Way, and then one from a Former Student who talked about his BAND more than anything else. We also got to use VOTING PADS like off Who Wants To Be A Millionaire to work out which colleges everyone came from, and then we did ... A GROUP EXERCISE!

I can sense many of you RECOILING at the idea of Group Exercises, and rightly so as they are so often merely exercises in GROUP PAIN, but UAL seems to have a habit of making them quite good fun. When I began my PhD, also at UAL, I had to do a whole WEEK of induction, and though some of it was a bit pointless the exercises were often dead good. For the exercise THIS time they got us to create SOMETHING to express one of the University's OBJECTIVES. We got "Transformative Education" which made someone say "ROBOTS!" (it wasn't even me!) so I spent a happy hour making THIS: 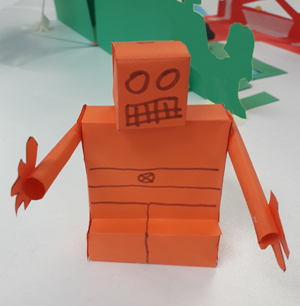 I am fairly sure that it had not much at ALL to do with UAL policy,but it was a lot of fun and I SUSPECT that the point of the exercise was to get everybody working together and - hey! - ENGAGING. If that's the case then it definitely worked, especially at the end when we all went round the room looking at what the other groups had made. I am pretty sure that SOME of the creations will be getting Arts Council Funding!

In case it's not obvious, this new job feels like it's going PRETTY WELL so far. I may have to give up on INDUCTIONS for a while!