Blog: Made To Be Tape

When I got home on Tuesday there was a THRILLING ITEM waiting for me in our letterbox - a PROOF copy of 20 Golden GRATES on CASSETTE!

When I opened the packaging it looked RUDDY BRILLIANT, although it wasn't QUITE as exciting as I was expecting largely because it looked EXACTLY like I thought it would after spending HOURS designing it. I suppose that that's a good thing, and I'm pretty sure that it will remain THRILLING when other people look at it, for truly, it is an item of GRATE beauty.

I mentioned that I'd received the proof copy on the twitter and a couple of people seemed surprised that it was real, as they'd thought I was only JOKING about releasing an album on cassette. In order to put everybody's mind at rest, therefore, I provide below photographic evidence that it is definitely a REAL THING, and that it is GORGEOUS! 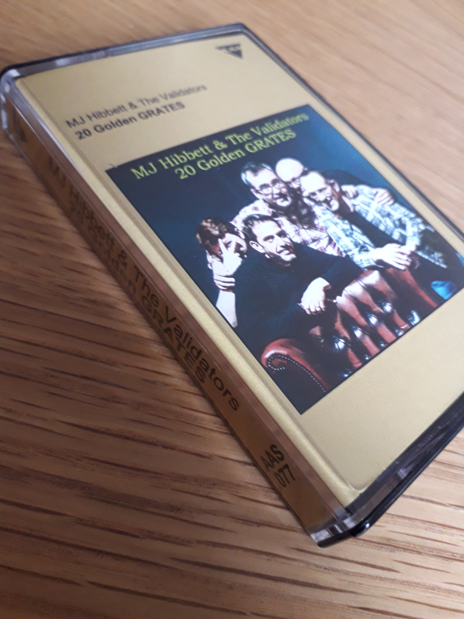 Once I'd finished GAZING in DELIGHT I then had the ARDUOUS task of checking that the actual audio was OK. To do this I dug out my USB Cassette player (the same one I used to digitise The Council) and discovered that I could put batteries in it and, to all intents and purposes, transform it into a WALKMAN!! Going through all the motions of using a tape player again felt deeply comforting, especially with all the firm CLUNKS and WHIRS of putting the tape in and pressing "PLAY", but the best bit was the sound itself. It was ACE - I've loved the way that music sounds on cassette, it sounds SMUSHED like all the best bits have been turned up and made more EXCITING. Apparently this is because of compression or something, but personally I prefer "smushed".

And goodness me, SMUSHING didn't half work for our stuff, it sounded AMAZING! As I listened I thought "We have been doing it wrong for two whole decades - we should ALWAYS release our music on cassette!" Perhaps it is because so much of my FORMATIVE musical years were conducted on TAPE (with all those other bands and for my early solo stuff) but it felt as if I had come home at last to the format that I was MEANT to use.

I had some slight trepidation at first, as the music did sound a bit rough/wonky/loud, but then as the tape moved on it all got SMOOTHER and I realised that that was just what we sounded like! The more recent, (very slightly) more POLISHED material actually sounded BETTER, as the SMUSHING made, for instance, It Only Works Because You're Here sound SUPER LUSH. It made me wonder whether I could maybe one day re-release Dinosaur Planet this way. Surely being played in a CAR on a CASSETTE is what it was MADE for!

(NB NO I must NOT release Dinosaur Planet on cassette - hardly anybody wanted it on a format that you could actually USE, I am NOT going to put it out on one you can't!)

It was a highly enjoyable experience which reminded me, as if I needed reminding, that COR! we don't half have some good songs! Reassured by the quality of the PROOF I have now PAID for the main run, which will hopefully be arriving in a couple of weeks. It'll be released at the end of the month, first for newsletter subscribers and then for everyone else - there won't be many though, so if you want one, you'll need to get in quick!

Dinosaur planet not selling? There's no justice in the world. Pretty sure I've got at least one Radio Shack C120 somewhere that's full of Validators and AAS stuff, back from when I had a car stereo that took tapes and hated tape adaptors... As I've got a proper deck set up and connected to the lounge amplifier I'll have to dig it out for a spin, see if the smushing is as VALID as I remember it being.
posted 13/4/2018 by MarkP