Blog: A Day Out In Doncaster

I was up bright and early on Saturday for an exciting day trip to DONCASTER. DONCASTER! A place where many have passed through, several have changed, but few have actual BEEN! Speaking as someone from Peterborough I must say that this, of course, is a perfectly reasonable state of affairs for any British population centre, and it was AS a person from Peterborough that I was going there for LO! I was off for my first Away game of the season!

The train from London to Doncaster passes, as so many do, through Peterborough, and thus I was able to meet Mr P Myland and many other Posh fans on the train. We got into Doncaster Actual just before midday and, after a brief wander and a couple of phone calls, found a large contingent of fellow Peterborians in a Weatherspoon's pub. I don't LIKE going in Weatherspoon's because a) it is basically funding Brexit b) the beer is usually on the turn and c) the pubs themselves are like drinking in a waiting room of DESPAIR, and this one was very much in this vein, so I was relieved when we toddled off down the road to the MUCH nicer Doncaster Brewery Tap. It was FULL of blue shirts, also lovely beer, also a UKELELE band who, by the time we had to leave, had the whole room singing "Delilah". Well, I say they had the whole room singing - I'm not entirely sure they WANTED everyone to join in, but they did!

UPDATE: I forgot to mention this in the first draft, but at some point during our wanderings round Doncaster a man came up to us and said "You going to the football? What team?" when we answered "Peterborough" he said "Aha! Adrian Durham!" For those who don't know, Mr A Durham is a radio presenter on TalkSport. He is also, perhaps more imporantly, a fellow alumni of Deacon's School in Peterborough and was in the year above me and Mr Myland at school (and in several school plays at the same time as me also). Crikey, if you had told me then that a stranger would know Peterborough because of Adrian Durham I would not have believed you - John Ringrose or Jason Blood, certainly, but Adrian?

Anyway, after some deliberate confusion at the mini-cab company over the road (involving everyone claiming to be called "Paul" - it seemed funny at the time) we were driven the 15,000 miles across Doncaster, out of Doncaster, and then across several time zones to get to The Keepmoat Stadium which is basically on the other side of the planet, in an industrial estate. Inside it was Actually All Right, like a cross between Pride Park in Derby and Kingsmeadow in Wimbledon i.e. modern but diddy. As we stood around near the bar before kick off I witnessed lots more Fenland faces coming in, spotting people they knew, looking delighted and striding over to shake hands. There were smiles all around me, lots of singing, and a genuinely happy atmosphere of people doing something they enjoyed with people they liked. It was lovely!

The happy atmosphere dissipated somewhat with the actual game, which was TERRIBLE. On the plus side, it was a gloriously sunny day, although that meant the Away end spent the next nearly two hours squinting under the shade of their hands, but that was about as good as it got. The Posh twitter account posted a picture where, if you zoom in, you can see me smiling and applauding something. I think maybe it was taken as the players came on at the start! 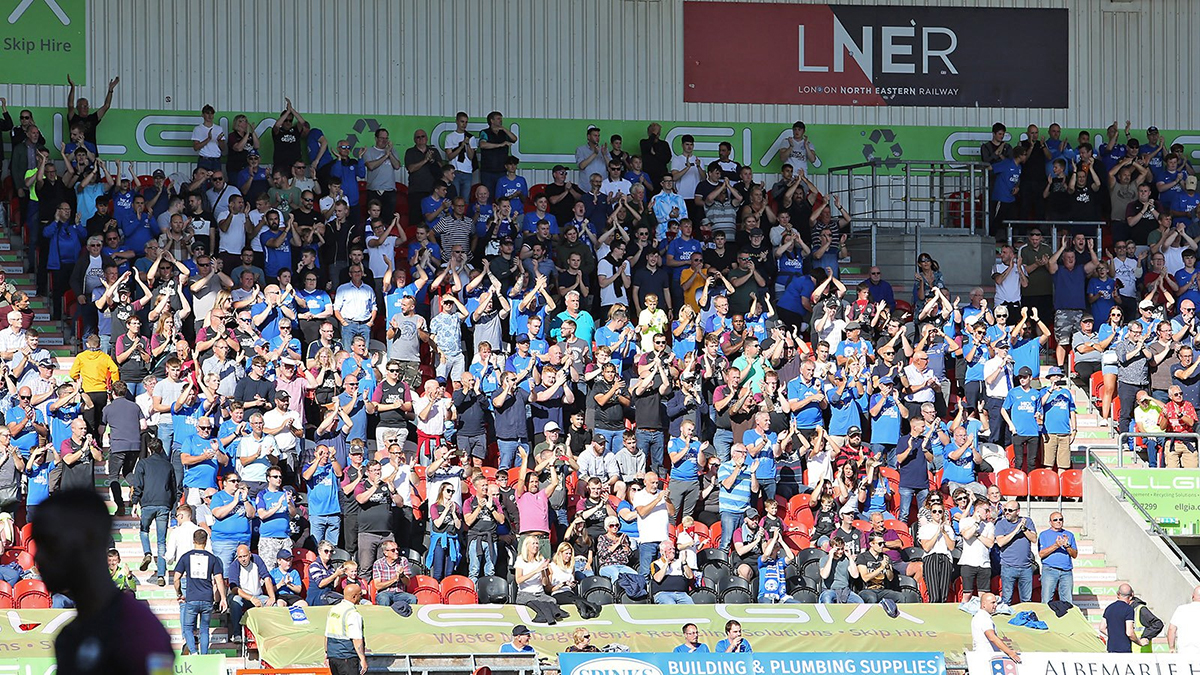 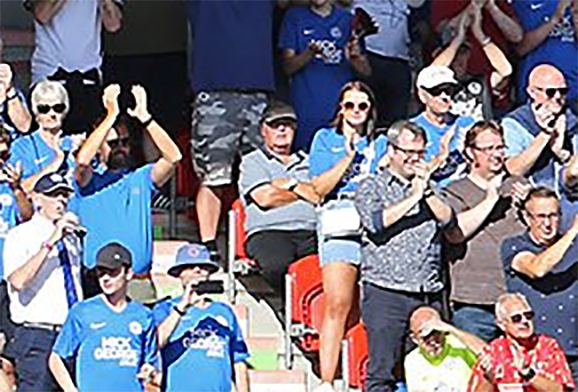 It was a somewhat deflated group of East Midlanders who made their way back into town, on what turned out to be an EXTRAORDINARILY long trek back. It took us about an HOUR, although there was a break for CHIPS about three quarters of the way back. After a visit to The Leopard the day ended with Mr Myland and I being THWARTED in our attempts to visit The Draughtsman on Platform 3 of the station (which I'd visited before with Mr M Tiller) due to it being shut. DENIED AGAIN!

We were joined on the train home by other Posh fans, but also fans of Norwich and Fulham, who were heading home after their own away games. As people went back and forth through the carriages I saw various different fans stopping to chat, to see how each other had done and commiserate accordingly. In these dark times of national division, seeing drunk people gently mock each other on a train was bloody lovely!