Blog: Playing To An Empty Room

Once a term (NB I work for an ART COLLEGE so that's how we think about these things) I usually do a series of training sessions, to show staff how to use the computer system that I run. It always feels to me like a TOUR but sadly THIS term it feels even MORE like a tour in that it looked like it would all have to be cancelled.

HOWEVER, and ALSO like other sorts of gigs, TECHNOLOGY has intervened so that I can now do the courses ONLINE instead, and so it was that on Monday afternoon I sat down before my laptop ready to give my first ever WEBINAR. To mark the occasion I even combed my hair and put a shirt on - it was the first time I have had to deal with BUTTONS for over two months, but I think I remembered how to do it. 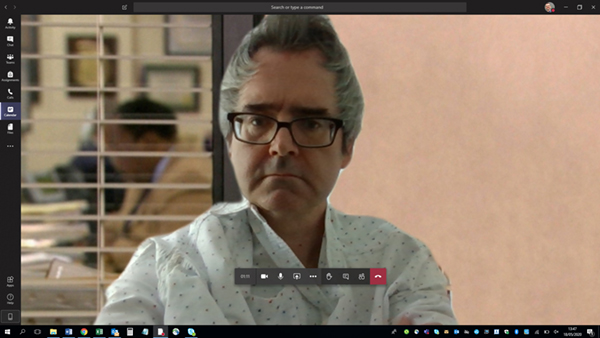 It's so professional I think I'm going to use it as my new LinkedIn profile picture!

I did another one of these this afternoon, and both sessions felt a bit ODD. As you can probably imagine, I like to throw in some GAGS as I go along, but the fact that everyone was respecting Teams Meeting Etiquette meant that everybody else was muted, so I couldn't hear the GALES of LARFS like what I usually do hem hem. Also I had to go and keep checking the CHAT section to see if there were any questions, which got a bit distracting, although I DID remember the classic advice for Responding To Heckles i.e. you read out what people have heckled/asked in chat, which tells everybody else what you're on about AND gives you time to think of an answer.

These sessions usually last about 40 minutes, and I thought that these would be much shorter, as there's less chance for veering off topic or wandering around checking everybody's screens to see where they're up to, but they actually lasted LONGER. Perhaps people feel more able to ASK questions when they're not constantly drowned out by the aforesaid GALES of LARFS? Either way, it seemed to work - I quite fancy doing some more now!