New Innovations In Clock Changing
As I'm sure you are aware, the clocks went back at the weekend (NB if you weren't aware - this is why you keep turning up early for things). Officially they changed at 2am on Sunday, but in OUR house we tried an ADVENTUROUS and INNOVATIVE new method, proposed and executed by The Hands On My Dial, which involved changing them at approx 7pm on SATURDAY instead.

"Why on earth would you do that?" you may ask. "Surely that puts you out of SYNC with everybody else? What is the benefit?" I initially thought such questions myself, but realised that it WOULD have put us out of sync with the rest of the nation, but only if we had had any intent of INTERACTING with the rest of the nation that evening, which we did not. It was one of those TOTALLY RARE Saturday nights where we stayed in and drank WHISKY and watched telly rather than... er... doing whatever it is other people usually do on Saturday nights, and the TELLY we were watching was all non-live, so THE TIME didn't really come into it.

What DID come into it, however, was the FACT we got an extra hour of SATURDAY. As The Days In My Week pointed out, "Who wants an extra hour of SUNDAY? I'd much rather have more Saturday!" Any doubts I may or may not have had about this course of action were instantly DISSOLVED. An extra hour of Saturday is a load more whisky and a whole extra episode of "Designated Survivor"!

Mark well where you first heard of this CUNNING SCHEME - I predict EVERYONE will be doing it within a couple of years!


Spectrum 35
I had an early start on Saturday morning, as I was due in Cambridge at 10:30am to open a CONFERENCE!

This was Spectrum 35, a celebration of the 35th anniversary of the ZX Spectrum. Five years ago I played at the 30th anniversary event at Anglia Ruskin University, but this time it was at The Centre For Computing History, which I have been to SEVERAL times before.

I managed to drag myself out of bed on time and got to Cambridge OK on a VERY busy train. In the taxi rank a nice Academic Lady told me there was some sort of conference going on, so there were more people about than usual, and also that the area around the station taxi rank, where they've built several new hotels, is "a bit of a knocking shop." Good to know!

I arrived at the museum to find a QUEUE to get in (I later discovered it had SOLD OUT) while inside I discovered the organiser, Mr T Eberle, looking very happy with how it was all going but wearing what I can only describe as BOOTLEG MERCHANDISE! 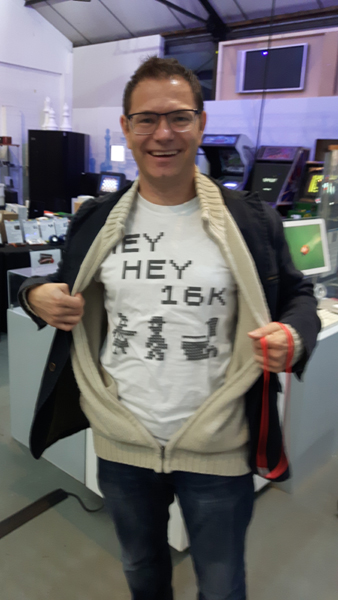 It was lovely to be back at the museum, and I had a THOROUGHLY enjoyable wander around playing on their FREE Arcade Games (including Space Invaders, Tempest and Alien Syndrome), visiting the Amstrad PCW (my first "proper" computer) and having the traditional GAZE of AWE at their WALL OF TAPES. 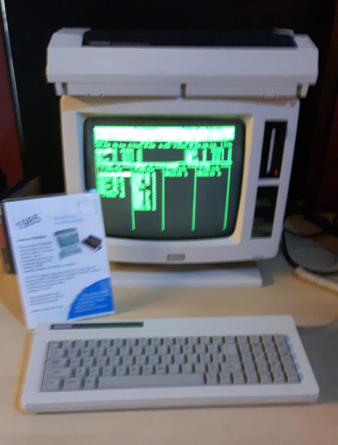 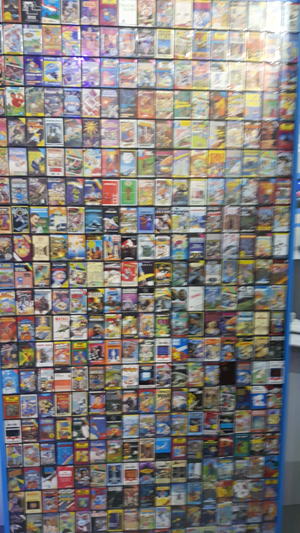 Thomas and I thought I'd be doing my set in the main hall, but then found out there was a CAMERA waiting for me in the classroom (where me and Steve performed Hey Hey 16K a couple of years ago) so I went in there instead, waited five minutes for people to troop in, and then played Hey Hey 16K. 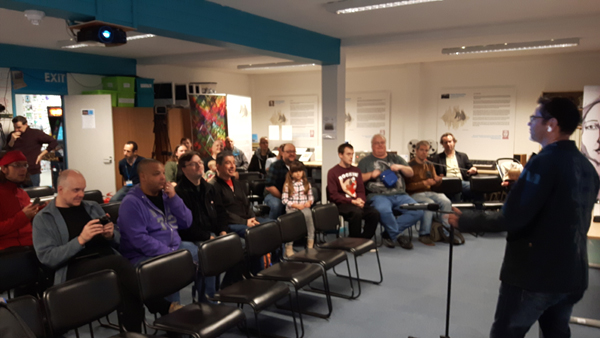 I had a LOVELY time, and even managed to get the audience to SINGALONG at the end, as you can see in the video HERE:

I THOROUGHLY enjoyed myself - was really nice to be playing to an audience who had HEARD of me, and especially such a POLITE yet FORTHCOMING one. At various points during the morning people would spot me, do a double-take, and GRIN, it was ACE! After the show had finished I went and played on some more of the machines, and as I attained the THIRD SPACESHIP in "Jetpac" someone leaned over and pointed out that I was enjoying "the thrill of getting through Jetpac" for real!

It was a long walk back to the station afterwards, but it was a very HAPPY one. Roll on the 40th Anniversary - I'll be there!!


A Croydon Of Two Halves
I was back in Croydon on last night in order to ROCK it. If it seems like I do MOST of my gigs in Croydon these days, that's probably because Mr T Eveleigh of Freedom Of Expression is pretty much the ONLY person left who still books me!

I got there a bit early so that I could get some TEA. I remembered that there was a Vegetarian Indian Restaurant somewhere on the High Street, so decided to take the opportunity to try it out. The experience was "mixed".

The food was fine - quite hot, but pretty tasty - but GOODNESS ME the service was SURLY. The woman who took my order seemed to be on a MISSION not to SPEAK to me or make eye contact, and other people working there seemed ANGRY to see me too. I wondered what they thought I'd done, then noticed a sign in the toilets that said "Please Do Not Spit In The Handwash." Who spits in the handwash? And how? And WHY?! The handwash bottles had screw tops, so presumably whoever HAD done it had gone to some effort to do so.

It was only when I left that it dawned on me - it must have been someone who looked like ME! That explains EVERYTHING!

The gig itself was happening at The Royal Standard, a tiny little locals pub next to the flyover, which I'd not been to before. Ms J Lockyer was in charge of proceedings, and she explained that we'd be playing next to the TOILETS. We were in a small corner, away from much of the rest of the pub, so I thought I'd avail myself of the PA system in order to make myself HEARD.

Mr W Pilkington arrived, having made the long journey from his flat on the other side of the underpass, as did Mr T Worth, the other act, and a few Audience Members, and so at 8:30pm I kicked off with THIS:


It did not, in all honesty, go very well. It turns out that having a CURRY before a gig is NOT a good idea, as my throat was all dry and spicy. Also I remembered why I usually chicken out of doing new songs (THREE new ones here, including a DEBUT!) as it is SCARY and I tend to forget bits. ALSO the nature of the gig made it extra difficult, as round the corner in the other side of the pub some of the regulars were SHOUTING at each other. This was particularly difficult - clearly they were doing it on purpose and what they were shouting was the kind of nonsense that I thought people stopped doing in the 1980s (e.g. "Another PINT for MY COMPRADRE Good Landloard!") but then again it WAS their pub and it was ME who was coming into to it to make a right old racket when all they wanted was to have a chat, so couldn't really remonstrate with them.

I was quite happy when my first set was all over, and I was able to make way for Thom Worth to come on and make a MUCH better job of it all. I did notice that he was sitting down, so I thought I'd have a go at that for my second set which, after a short break, went like THIS:


This went MUCH better - partly because The Chief Regular, who had been SHOUTING the most, had left (and so everyone else stopped doing it too), partly because I was sitting down so it didn't feel so much like I was demanding attention, and partly because I was doing a load of songs I actually KNOW! I really enjoyed this section, and wished I could have gone back and done the first half all over again!

I went to the bar for a celebratory BEER, where I discovered that the woman behind the bar was ALSO from Peterborough, so we did the traditional thing of naming PLACES to each other - you hardly ever meet anyone other ESCAPEES, so it's Mildly Exciting to hear someone else say "Wisbech"! When I got back to the table Thom, who had just started his set, pointed out that I'd left most of ANOTHER beer at the side of the stage, which meant I now had TWO. The evening was looking up!

I fear I may have got OVER JOLLY at this point, as I forced him into a discussion about how old our Soundman was - he was born in 2000 (!!!) so I pointed out that he was therefore underage, and there followed one of those conversations you can only really have after a few pints, trying to work out if it's possible for someone born 17 years ago to actually be 18. Spoilers: It Isn't!

And so the evening came to a rather pleasant close - it feels like a WHILE since I did a gig like this, and though I didn't enjoy the first half I certainly did the second. On the way home I popped in to The Spreadeagle, where Tim was running ANOTHER gig, and said thanks to him. After all, if not for his efforts I'd hardly be doing any gigs at ALL!


Quest For Stationery
The EXCITING IDEA for the next Validators album that I mentioned yesterday has moved on APACE, and we are now looking at DATES for a meeting with the other PARTY who would be involved. I would love to tell you about the heady whirlwind of SUPER EFFICIENT ADMIN on BOTH sides that has brought this about so quickly, but alas I must hold my tongue until it is properly sorted out so instead I will speak to you of STATIONERY.