The Name Is Doom!

It's been a whole year since Doctor Doom last starred in a Marvel comic, and a full two years since the climax of The Peril And The Power, but I think it was worth the wait! Not only is this a great late-period Lee and Kirby story, full of big ideas and amazing artwork, but it also marks a huge shift in Doom's overall character, moving him definitively from his origins as a mad scientist who more or less worked alone to the dictator in charge of a whole country's worth of mad science that he would remain as into the seventies and eighties.

This change in Doom can be seen from the front cover, where he lurks menacingly above the Fantastic Four, who are trapped in the weird world of Latveria. The four-part story which starts in this issue was later acknowledged by Lee and by Kirby as a homage to "The Prisoner", the Patrick McGoohan series based in "The Village" which was first broadcast in the US around the time that Kirby would have been plotting out these issues. He would later go on to pencil an adaptation of the series in 1976 which would not be released until after his death.

It's a little while before we get to Latveria though, as the first few pages follow the Fantastic Four on their way home from the previous issue's storyline with the Inhumans. At the end of the third page the story moves to "a forbidding castle, deep in the heart of the distant Balkans" where an old man is trying to escape a terrifying "him". 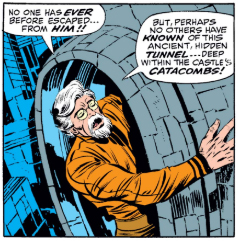 The reader isn't told where this village... sorry, small Balkan state is, or who the man is fleeing (although they could probably guess from the cover), which makes the next page reveal even more powerful than it otherwise would have been. Which is still VERY powerful! 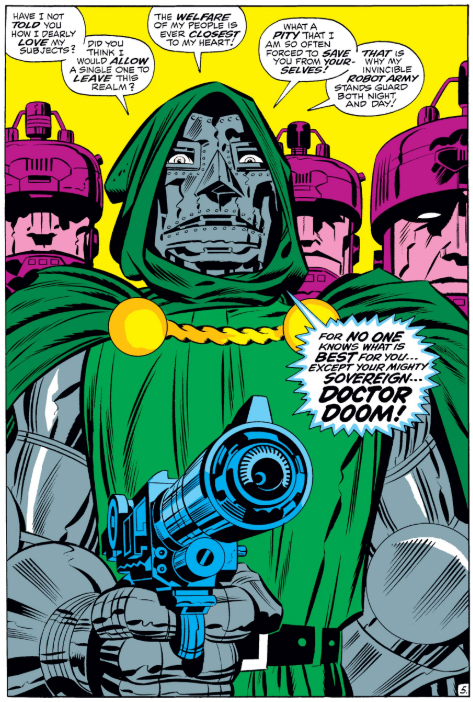 Doom has always been self-deluded, but this character trait is really cranked up here, as he bemoans the fact that some of his citizens are ungrateful for all he does for them - he provides clothes and food and all he asks in return is total obedience. Previously he's either derided his citizens or acted protectively towards them, but now he moves into full-blown dictator mode, acting as a representative of an American view of life in Soviet Russia. This is a brutal tyrant, who tells his people that they are blessed by is rule, and to be happy or die - he is basically Stalin. 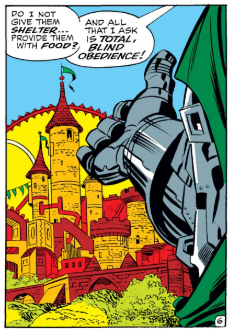 Meanwhile the Fantastic Four are getting a briefing from Nick Fury, who has found a Robot Arm that is so deadly that it takes the combined might of the Fantastic Four and Shield to bring it back under control when it escapes from containment. Fury suspects that this must be the work of Doctor Doom and, fearing the development of terrifying new super-weapons, he asks the Fantastic Four to investigate.

The idea that Doom is harbouring weapons of mass destruction is one that will be returned to many times over the coming years, with any attempt to take action against him often thwarted by the politics of his position as a national ruler. Sometimes Doom will be seen as a representative of the Soviet State, other times a hard to swallow alternative, but here is shown as being even worse than America's sworn enemies. When the Fantastic Four travel incognito through "the heart of Communist-occupied Central Europe" they find that even KGB Agents fear Latveria. 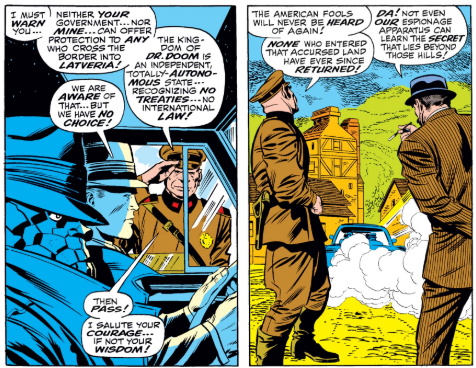 As soon as they enter the country the team (with Crystal doing maternity cover for Sue, who's just had a baby) are attacked by Killer Robots. Reed Richards claims to have had a plan to "let" the Robots capture them, though given the trouble they had fighting a single hand I imagine they'd have struggled to do anything else when there's at least six whole ones attacking. 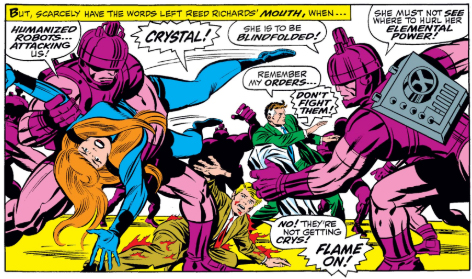 Unfortunately for Reed's "plan" Johnny loses his temper, so the team have to fight anyway, and end up losing. When their defeat is complete Doom himself appears, ordering the robots to take them away as his prisoners.

When the team wake up they find themselves in a surreal world, treated as revered guests in a distinctly odd version of Latveria. Previously the country had been an American's idea of what Eastern Europe might be like, based as much on old movies and Kirby's experience of Europe during the Second World War as reality, but here it is deliberately strange, in obvious homage to "The Prisoner". Rather than the dungeons they might have expected, the find themselves in the midst of a parade to welcome them. 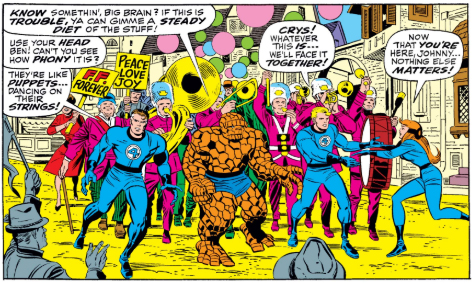 This is, of course, all part of Doctor Doom's plan. However much things change, Doom will always have a plan, and he will always watch it unfold via television. 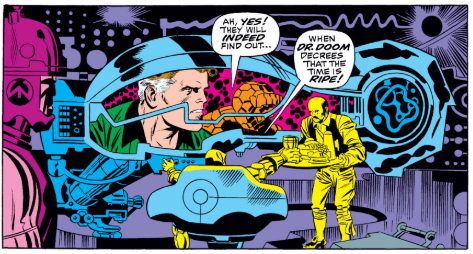 There's just time for Doom to threaten an underling with "the penalty for looking discontented" before the story ends with him appearing on another TV screen to tell the Fantastic Four to be happy... or die! 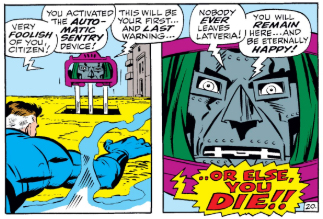 The ever-watchfulness of Doom ties in neatly with the homage to "The Prisoner", but what I think is really interesting here is his development from someone forever leaping out of windows to escape, just a few years ago, to a fully-fledged dictator, ruling an entire nation with maniacal zeal. There's a lot more of this to come!