Today we're looking at one of Doom's adventures into non-comics media, and it's an area I know very little about - role-playing games! When he's appeared in cartoons, or radio shows or computer games I've had at least some experience of how those all work, but I have had precisely one direct experience of role-playing games, and it wasn't a very good one.

It was a rainy lunch-time in my second year of senior school (so I would have been about 12) and someone had brought in a copy of Dungeons And Dragons. My memories of it consist of a lengthy, very complicated, explanation of the rules, approximately two throws of the dice, a lot more explanation of what we'd done wrong, and then we were all dead. It was all incredibly pernickety and annoying, and I think that all of us gathered around that school desk were put off it for life.

Since then I've known several people who love these games, and tell me it's a free-flowing communal improvisation, expressing imagination wherever it takes you, and I'm sure it is, but I must say that reading through some of the material today takes me right back to that lunchtime.

There are five items all together in this look at TSR's "Marvel Superheroes Secret Wars Special Campaign Adventure" - three hefty tomes of rules and two sets of figures. The figures are pretty easy for me to get my head around. The first is a set of miniature figureines showing the heroes and villains in action, while the second is a similar, presumably much-cheaper, set of cardboard cut-out versions. This is an adaptation of "Secret Wars", so of course Doctor Doom is featured in both. 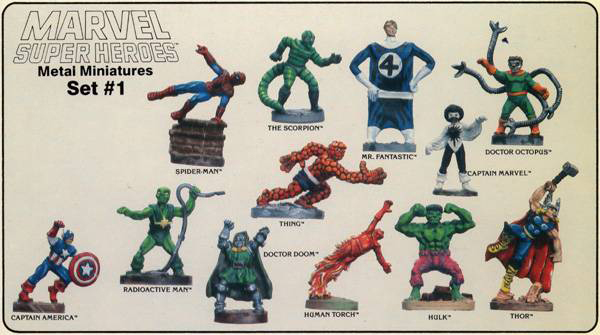 In both cases Doom has his arms raised in anger, with all his usual character signifiers in place, although for some reason his gun holster is on his left hip rather than his usual right on the cut-out version. Whichever of these figures are used, they're all meant to go onto a map somehow, which is then used to plot the characters' progress through the game.

It's at this point that I get a bit lost, as the actual game instructions are bewilderingly complicated. It sounds very interesting to begin with, offering the players the chance to create their own stories - "You can branch out on your own. Not all the tales of the SECRET WARS have been told," it days. However, there are then sixteen closely typed pages of RULES telling you exactly what you can and cannot do, in a game divided into days with each day divided into four "shifts", which makes it sound like work rather than fun. There's a map of Battleworld itself, then rules on how you move around, how buildings work, how events occur and how characters can act. I know it's called a "rulebook" but this seems like a lot of rules!

Interestingly, for me at least, the various areas covered do align quite well with the work I'm doing on my PhD. My categorisation divides character aspects into character-based (what they look like, how they talk etc), storyworld-based (the settings, rules, history and so on), behavioural (how the characters interact with each other within the storyworld) and authorial (who creates them). There's nothing much about authorship in this book, but there's a LOT about everything else.

This continues when we get into the "Roster Booklet" section, where each character gets described in terms of the games statistics. For characters these include ratings for fighting, agility, strength, endurance, reason, intuition and psyche, then scores for health, karma, resources and popularity. The ratings have a scale with names like "excellent", "remarkable", "typical", "good", "unearthly" and "amazing" which, as far as I can see, aren't actually put in order anywhere. Is being excellent better than being amazing? Where does being unearthly come into it? It feels very much like the authors wanted to make sure there'd be as many chances for bickering as possible!

Doom's listing is pretty accurate, and includes a neat summation of his origin which even has space to address the knotty problem of him apparently being dead before Secret Wars began! 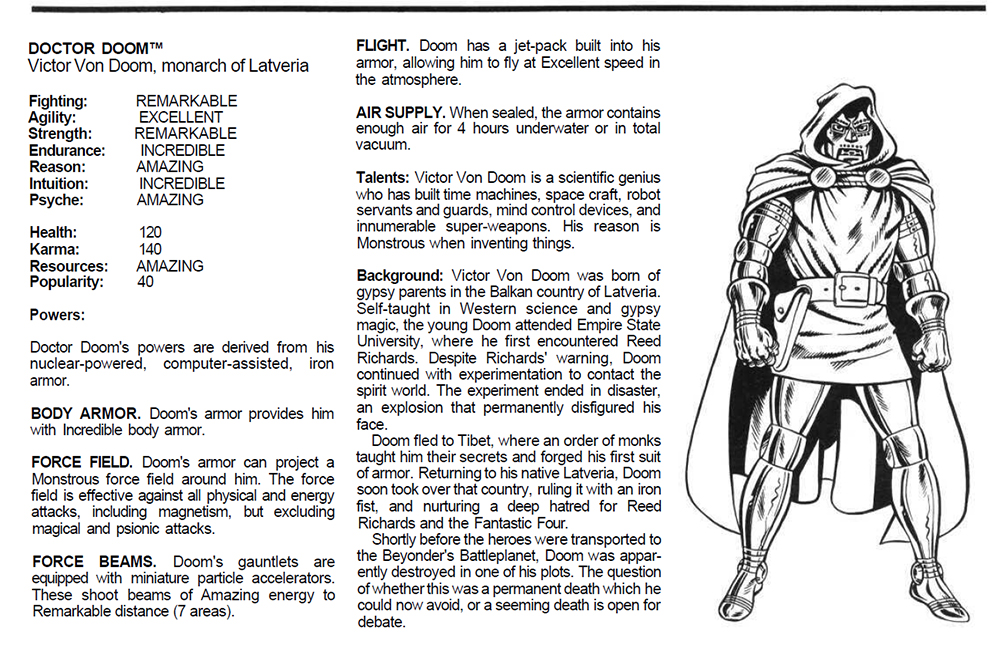 As somebody who's spent several years categorising Doom, there's not really much to disagree with here. Even the relatively high score of 40 for "popularity" seems fair enough, as he does know a lot of people!

This is explained in the next book, called the "Player's Book", as due to him being a "charismatic bad guy... whose very evil bends others to their will", which sounds about right. This book is 100 pages long and is packed with rules about everything you can imagine, and again feels like a device for encouraging bickering. I can imagine it being very handy if you were setting up a computer game, and using it as a way to develop the rules that ran it, but it does seem like an awful lot of work to have to go through before you can even start playing. As I say, I've spent five years on the PhD trying to understand how this sort of thing works, and even I think it's a bit much!

Most of the illustrations for these books are taken from the comics - even the front and back covers of the main rulebook are adapted from the covers of Secret Wars #1 and #6 - but the front of the "Player's Book" and final "Judge's Book" do at least have original art, with the judge's book featuring the villains. 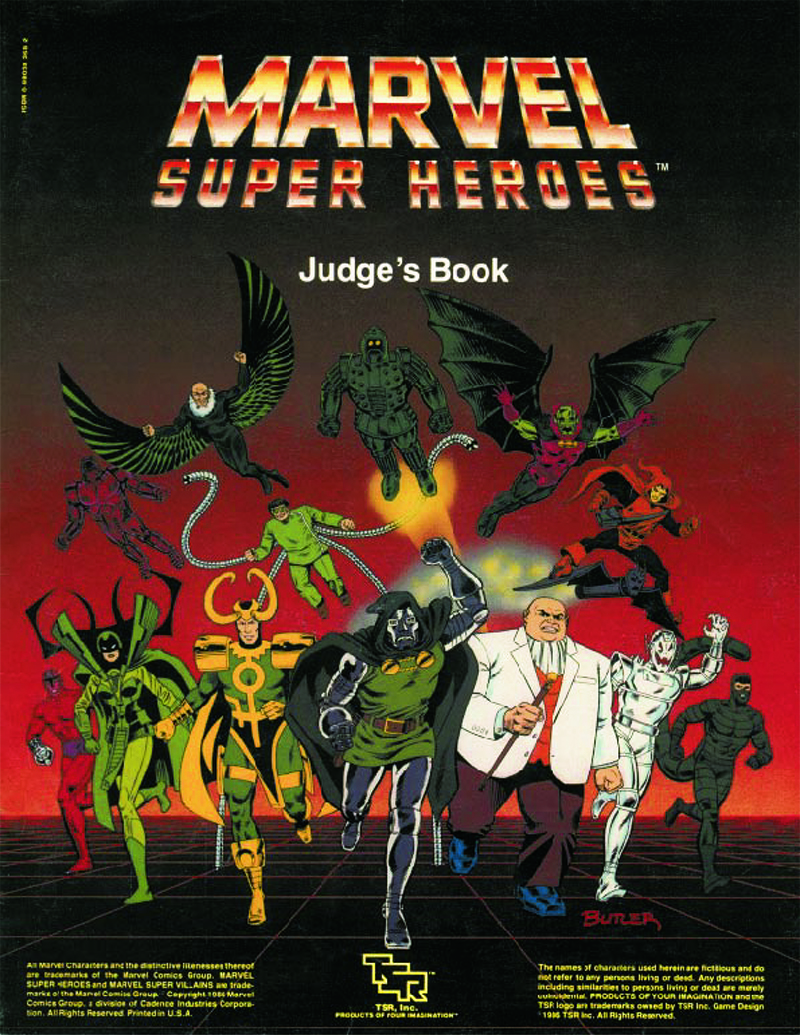 It's nice to see that they've put Doom in his proper place, front and centre leading all the others forward! This is another massive tome, although this one does at least recognise the fact with a sentence right at the start that says "Don’t let the size of this product, the amount of text included, put you off." It goes on to say that this, along with the Player's Book mentioned above, is an expansion of the original game, encouraging judges and players to invent new stories using the game machinery described. Within this book there's new rules about things like other dimensions and creating new settings, and the general gist seems to be more towards fans exercising their own imaginations to generate more stories, although it's all in the context of loads and loads of facts and figures and rules. As I say, if this was all in a computer game then I guess all of that would be invisible, allowing players to feel like they were in a "sandbox" where they could do what they like. Maybe it's just that seeing the mechanics laid out like this makes it feel more... well, mechanical.

Doom appears in the "Villains" section, which has a much clearer version of character attributes - the categories are still the same, but this time they get numerical scores and, in line with the idea of "negative popularity" his score there has changed from 40 to -40! He gets two columns of text, as opposed to the usual single column for other villains, which includes information about how his Doombots work, and another version of the origin, which is worth putting here in full:

Victor von Doom is a self-taught tyrant, who rose from humble beginnings as the son of gypsies to his present status as an international madman. Doom is a technological genius, and is continually modifying his armor with new inventions and devices. He is a man of honor and his word, and specializes in schemes to destroy his enemies. He has three goals in life: to rule the entire world; to destroy his rival Reed Richards; and to rescue the spirit of his mother, which is trapped in a netherworld dimension. He is not someone to offend, as he will take the time and effort to hunt down and destroy his enemies.

I love the idea of "international madman" being something to aim for. I imagine you'd start as just a local madman, compete to national level, and then move onto the world stage.

More seriously, I find the description of his three motivations very interesting. In my research I've found that, during this period, the desire to save his mother only comes up a couple of times, and the need to thwart Reed Richards only really crops up when he's in a Fantastic Four comic. In other series, and especially in other media, Doom rarely if ever mentions him, which was a surprise as this is often given, as here, as one of his main motivations. Even ruling the world isn't quite as big a motivation as it's often said to be. Instead, according to my research anyway, what drives Doom is the need to prove himself to be better than other people. That's pretty much it, which I guess does cover ruling the world and beating Reed Richards, but is far and away the most common thing that drives him.

Towards the end of the guide there are brief descriptions of what we would these days call "Non-Player Characters". Being comics, this includes a huge variety of creatures, from fish and horses to "Dinosaur, Giant Armored" and "Dinosaur, Giant Radioactive", and from Asgardians and Denizens Of The Dark Dimension to Paramedics and Lawyers. Truly, all human (and non-human) life is here!

In summary then, these rulebooks and figures are similar in some ways to the overriding research project behind this blog, which is trying to find ways to describe how transmedia characters work. They're surprisingly similar in places too, although I'd like to think that my eventual schema will lead to less bickering... although, on the other hand, maybe it won't!