Doctor Doom appears on the cover of every issue of the four-issue "Fantastic Four versus The X-Men" mini-series, but he doesn't actually appear in it that much, unfortunately. He doesn't really appear in this one at all, apart from that cover image and a Dream Sequence that takes up the first few pages.

For years, Franklin Richards' super-powers had been extremely vaguely defined as "very powerful" without really saying what they are. In this issue they include seeing the future, astral projection, and convoluted metaphors. Many of these are expressed in the aforesaid dream sequence, where Franklin watches his Dad, Mr Fantastic, carrying his Mum, The Invisible Woman, around an Eery Dreamscape, having apparently killed her. Wolverine turns up and attacks Mr Fantastic for killing the X-Men too but misses, falls over, and ... er... dies. 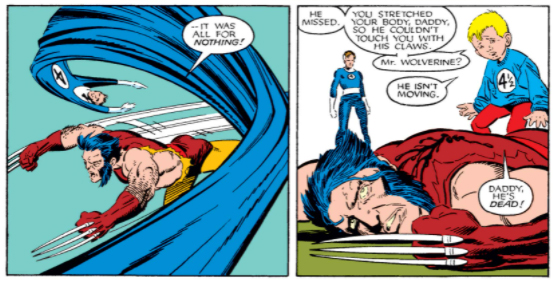 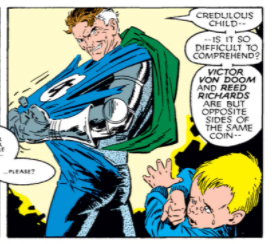 There's a lot of Child Psychology going on here, but there's also some great character work as the cold, unemotional version of Reed Richards transfroms into Doom and his speech patterns do too. Reed/Doom takes up the Mask Of Doom and puts it on his face, completing the transformation and interestingly echoing the very recent canonisation of the idea that Doom was mostly scarred by putting on a very hot mask, as seen in Fantastic Four #278. 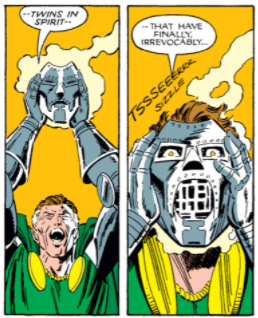 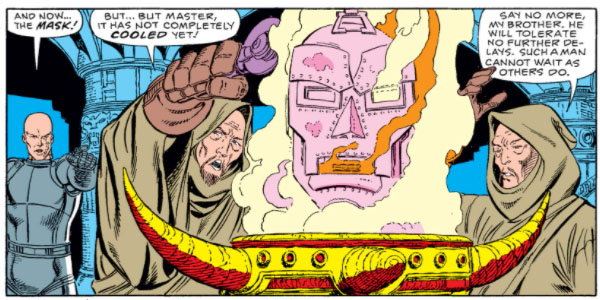 It also echoes an idea we've seen a few times before, of Reed and Doom being the same person, such as in Marvel Team-Up #133. 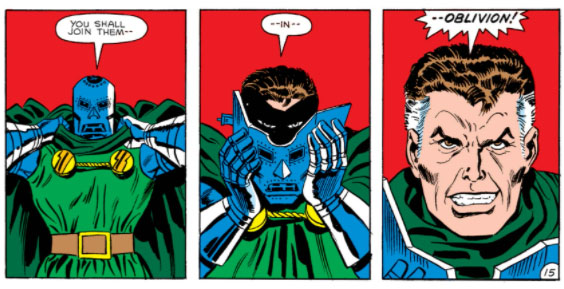 That's all the Doom we get for this issue, though it's not all the Child Psychology, as Franklin is brushed off when he goes to tell his Dad about his dream. Luckily Sue Richards is nearby, and she displays her excellent parenting skills by using that tried and tested method of getting frightened children to go back to sleep again - she gets him to help up open some old packing cases.

Was that tea set packed like that? Does Reed Richards have special Science Packing Foam?

Also in the crate is REED RICHARDS JOURNAL STATE UNIVERSITY, but before we can find more out about that we cut away to Muir Island where the X-Men are busily catching us up with what's been going on lately. They're now living in Scotland with a bunch of new members who don't all get on (as is the way with X-Men), including Dazzler and Longshot, who stop off on their way back from collecting groceries by speedboat to rescue a drowned fisherman. More importantly for the series as a whole though, we find out that Kitty Pryde has got stuck in Phase Form and only has days to live! 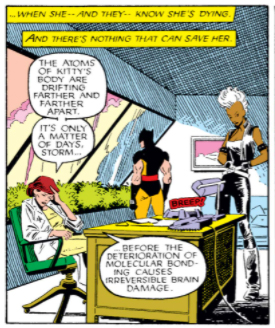 Back in New York, Franklin's dream is coming true as Sue confronts Reed with the journal, which she has read. 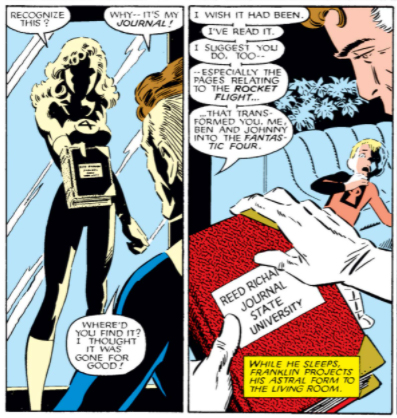 You don't read people's journals Sue, nothing ever good comes of it, especially when your future-seeing son explicitly advises you not to!

Over in Greenwich village we see She-Hulk, who just so happens to be reviewing The Trial Of Magneto for a charity event. I say "just so happens" because she and The Thing then get caught up with stopping a burning building from collapsing, and who should turn up but ... Magneto! 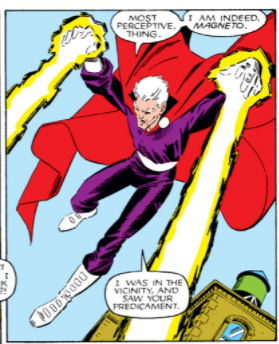 Magneto's there to ask Reed Richards for his help, as one of his experimental devices might be able to save Kitty. He agrees to go to Muir Island along with Thing, She-Hulk and The Human Torch, with The Invisible Woman choosing to stay home and be furious about what was in the journal. When they arrive on Muir Island Reed's in a bit of a state, worrying about what will happen about the Journal. This leads to him being over-cautious and not wanting to risk using the device, something which causes more of Franklin's dream to come true, as a furious Wolverine attacks Mr Fantastic, just like at the start of the story.

What can it all mean? What was in the journal? Why won't Mr Fantastic help the X-Men? And will we get a little bit more Doctor Doom as the series progresses? Find out... next time!