Before we get started on the contents of this issue, I think it's vitally important to recognise how brilliant the cover is. Doctor Doom is lurking menacingly in the background, the Fantastic Four are lying dead, Franklin is bawling his eyes out, and Wolverine is trying really hard to be comforting by saying "You're mother's been avenged, okay kid?" He is the best at what he does, and what he does is not counselling.

Once again, Doom is on the cover but he's hardly in the comic itself at all, though at least it is actually him this time rather than just a dream. His appearance is begun when it turns out that the fisherman Dazzler and Longshot plucked out of the sea last time isn't a fisherman at all but some kind of robot. 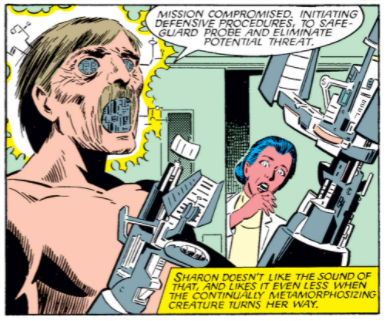 I like the way this is described as something only mildly perturbing, like bringing home a new jar of jam and finding that the popping lid isn't popping. I suppose that's the way it is on Muir Island (with robots, I mean, not jars with pre-opened lids). The robot is actually a Projection Device, which then stomps out onto the tarmac where the FF and the X-Men have been having a fight as a result of Mr Fantastic not being prepared to cure Kitty Pryde from her Phasing Into Nothingness disease. The robot has of course been sent by none other than... Doctor Doom! 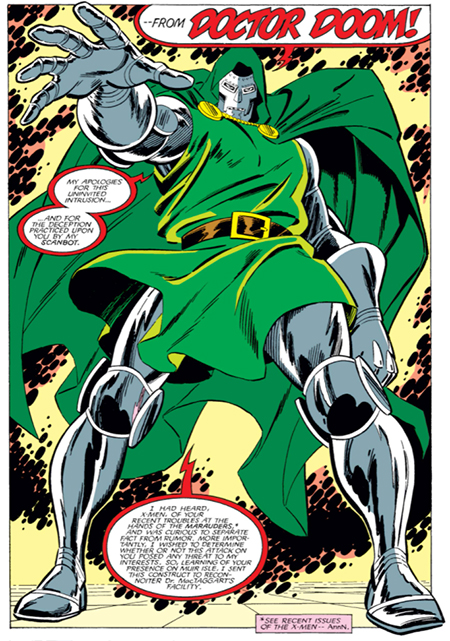 There's a REALLY lengthy explanation here about why he used the robot, rather than, say, sending a fax. The real explanation, of course, is that this is a lot cooler than even faxing would have been in 1987. Doom appears in hologram form to offer to help, recreating the Molecular Reintegrator that Reed Richards refuses to use, and curing Kitty. As ever, Reed doesn't like the idea that Doom would actually do something better than him (why yes, I HAVE read a lot of comics starring Doctor Doom and started to see things from his point of view) so stomps off onto his plane and leaves the island. Doom himself disappears for the rest of the comic, telling the X-Men to call him when they're ready. 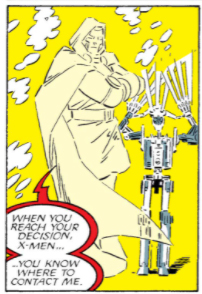 After that most of the rest of the comic is a whole lot of talking. The X-Men spend pages and pages discussing whether to take Doom up on his offer, and eventually decide that they will. It's massively padded, as there's never any question about whether they will or not, but I guess this is Chris Claremont in his Pomp so that's what you'd expect. The FF, meanwhile, have another lengthy chat during which they discuss the journal that Sue found last time, which appears to suggest that Reed knew all along that their trip into space would transform them into superheroes. This involves some nice image quotation, with a bunch of iconic images from Fantastic Four #1 recreated by John Bogdanov.

It's still Chris Claremont writing it though, so there's still an awful lot of dialogue! The issue ends with both teams in their living rooms looking glum, the FF because they're on the brink of splitting up (again), the X-Men because they're about to make a deal with Doctor Doom. It's sort of an anti-cliffhanger - "come back next time and hopefully things will be a bit more exciting than this!" But will they? Come back next time and find out!