A Matter Of Faith

What's going on with the covers for this series? I wonder if Jon Bogdanov drew them all before reading any of the scripts, expecting all sorts of action and excitement and getting... well, lots and lots of talking. As with last time, it looks great but nothing even approaching this scene happens in the comic itself!

We do get some quite interesting additions to Doctor Doom's history, but before that we have to wade through an awful lot of Claremont's trademark dialogue, which I must admit does become annoying after a while. Actually, it's pretty annoying to start with, as we start with Kitty changing the lyrics to "I am sixteen going on seventeen" in her head but changing the words, and then - in her internal monologue - offering a formal apology to the writer. 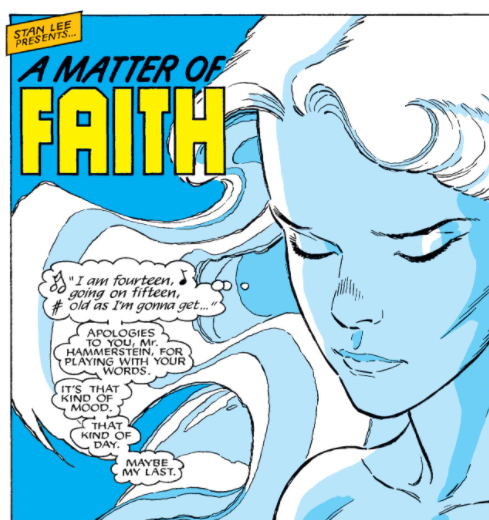 There's several more pages of extremely verbose inner dialoguing, as Franklin appears to comfort Kityy, and then even more dialogue between the FF as they fly to Latveria. As I said last time, it doesn't half go on!

However, all this talking does give us a bit of previously unheard information about Doctor Doom's back-story. She-Hulk apparently spent some time at Empire State University (the fictional University where most Marvel characters go) and spoke to some old lecturers of Reed and Doom. According to them Reed and Doom were highly competitive, constantly arguing with each other about all manner of topics as they stomped around the campus together.

This sounds entirely reasonable, and fits what we know so well that at first I didn't notice that it isn't actually something that had been mentioned before. The story of Doom and Reed being rivals has often been told, but this little detail hasn't, and it easily explains why, for instance, Reed would have been doing looking through Doom's equations. It also leads to yet another quotation of the famous image from his origin story in Fantastic Four Annual #2 that's been seen so many times before. 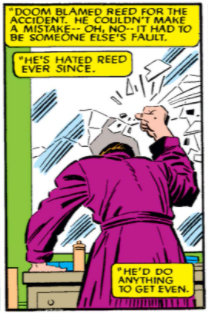 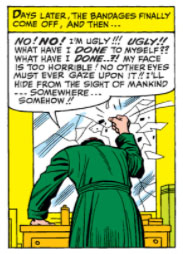 It's worth restating at this point that the art throughout is fantastic. Jon Bogdanov is very good at facial expressions, drawing a great Franklin (even when he's being written at his most mawkish) who actually looks like a child for once, and a charming panel where Dazzler delights in beating Havok during "training" in the forest. 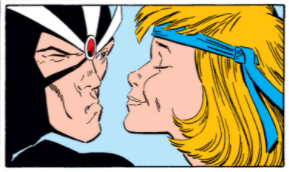 The "training" session (training for some advance bickering and fighting, perhaps) happens while everyone's hanging around waiting for Doom to finally get started with his cure for Kitty. However, when this does eventually get started it's almost immediately put in jeopardy by Magneto, melting Doom's robots with his magnetic powers and thus interfering with Doom's computers. 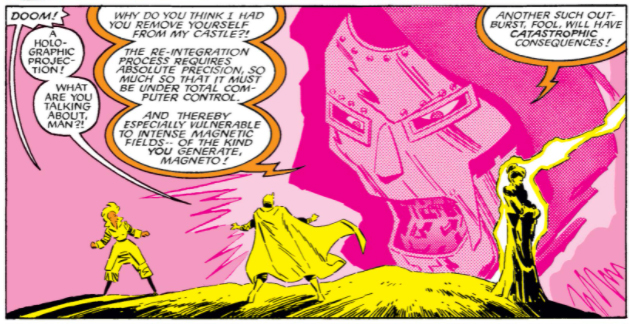 This is an absolutely classic bit of Doom action, with him looming out of the sky as he has done so many times before. The other characters might be annoying and stupid, but Claremont and Bogdanov are giving us a great Doctor Doom!

A prime example of this stupidity appears on the very next page. The Fantastic Four arrive and Magneto decides - despite being explicitly told, only a few seconds ago, that using his magnetic powers could kill Kitty - that the best thing to do is to use his magnetic powers to bring down the FF's plane. Storm is rightly livid with him, as is Doom. 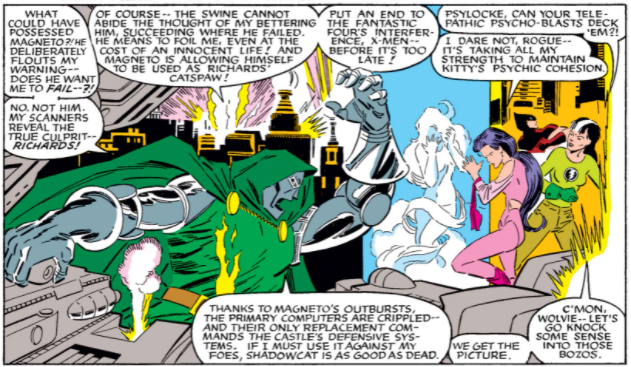 He sends the X-Men off to stop the Fantastic Four getting any closer, which they (stupidly) do. This leads to an extremely long and pointless fight which appears to be there to fulfill two functions: to fill in some space, and to get Rogue to steal the Human Torch's power and accidentally burn all her clothes off, like a superhero version of Jane. 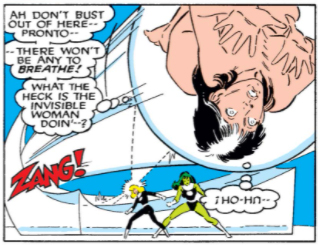 This goes on for ages until Franklin turns up and tells them to stop being such a bunch of idiots, and they all stomp off back to the castle where Doom is considering his next move. He's formulated an extremely cunning plan which result in either him saving Kitty and looking great, or getting to put the blame on the FF if it doesn't work. 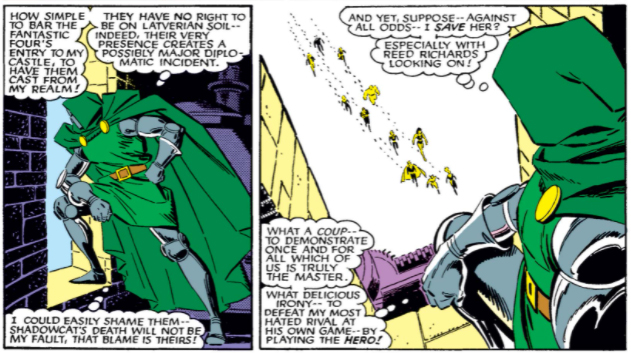 Better yet, he's spotted that Reed is still carrying that fake journal around - a journal which Doom recognises. It was him all along! 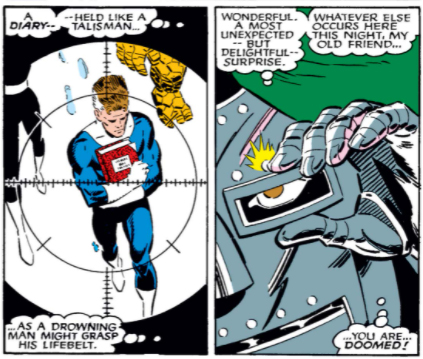 Everyone gathers around as Doom starts the process of curing Kitty, only for Reed to notice an error in Doom's calculations. As The Thing says, "Remember the first time Reed gave you a warning, back in college? Didn't you learn your lesson then?" While this is entirely true it's not exactly tactful, especially when Doom blames Reed for the entire incident Ben's referring to, so in the end it takes The Wisdom Of A Child to calm everybody down and work together. 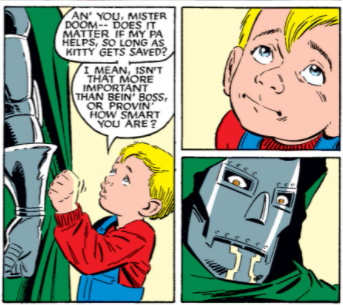 Doom and Reed start the process and all is well, until Reed is suddenly struck by Doubt. Maybe he did write that diary after all, he thinks, despite the fact that he has no memory of doing so. Doom suggests he get Psylocke to open his mind and find out, but this - well, basically, it's three pages of torturous self-examination as Reed grapples with his "inner demons" when actually he should be getting on with it and saving Kitty. It's intensely annoying, especially as Reed is eventually cured by Sue and Franklin Having Faith In Him and his own self-belief. 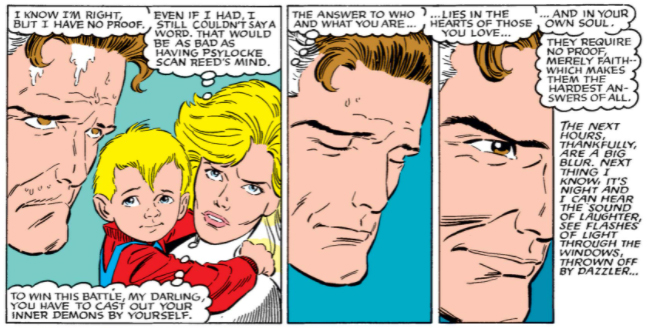 That was a whole lot of drama leading up to someone just going "Nah, it's fine."

The rest of the issue is a great long slab of everybody sitting around chatting again. The highlight is Sue telling Doom that she knows he forged the diary deliberately (years ago, I guess, as a long-term Scheme?), to which Doom responds by going on about caviar. Not only is this some pretty excellent Doom characterisation, but it also gives us another solution for the age old "How does Doom eat?" question - his mouth grill appears to be retractable!

Sue warns Doom that she could kill him any time she wants using her forcefield, and when he doubts this she replies "Be careful Victor. A lionness is most dangerous defending mate and club and den." It's pretty awful dialogue, but it does lead to a nice image of Doom looking rather deflated. 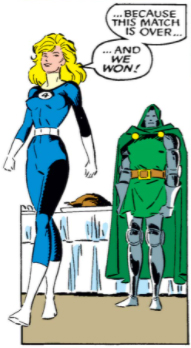 And there it all ends. This has been a rather peculiar series to read, especially when looking for signifiers of Doom. He's hardly in the first two issues at all, despite appearing on the (entirely misleading) covers, but when he does turn up he acts in a very Doom-like manner. Or maybe he just seems more suave, adult and intelligent when surrounded by a bunch of other characters who, apart from Franklin, are a load of hopeless idiots?

Talking of Franklin, we'll have a whole lot more of him soon, but before that we've got a few more cameos and posters to look at, as we very much head towards the last few texts in this whole thing! See you back here next time!