We're getting really close to the end of this project now, with only a few texts left to go in the official list and then a couple of "addenda" where I've discovered other items along the way that should have featured much earlier. After that I'm hoping to do a couple of overviews, looking at how Doom works and what sort of thing keeps cropping up, such as a particular aspect of Doom's history that keeps getting referred to again and again, including in this issue i.e. that time he stole the Silver Surfer's power cosmic.

The original storyline took place over four issues, in the classic "The Peril And The Power" running from Fantastic Four #57 to Fantastic Four #60 (not 58-60 as it says in the editorial box below), but here the whole story is retold in just three panels, as part of a brief history of The Silver Surfer which takes about three pages all together to give us his whole story so far, including a panel for the aforementioned Silver Surfer #1 of 1982. 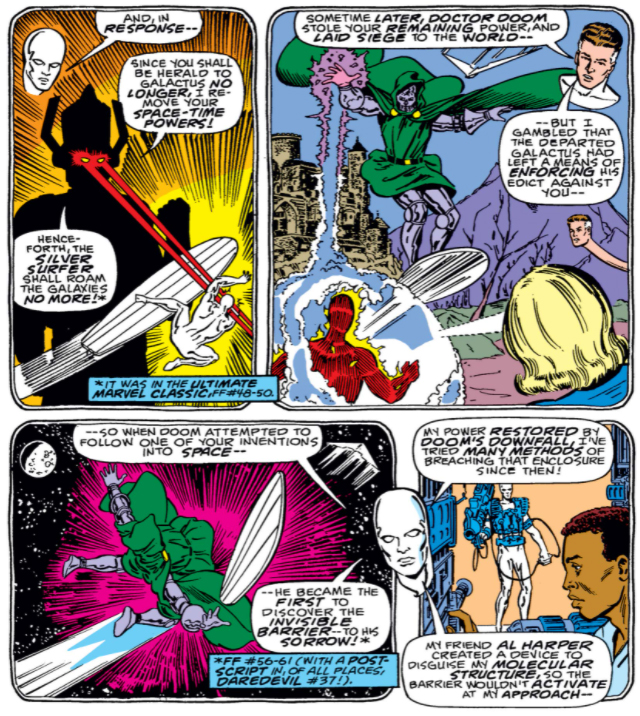 Doom doesn't appear in the rest of the story, which sees the Fantastic Four helping the Surfer to escape the Earth, after which he goes to visit Galactus to ask him not to put him behind another barrier (personally I'd have just kept quiet, rather than alerting him to the fact that I'd got out). Galactus sets him a quest to rescue his current herald, which the Surfer does fairly easily, and with his mind set at rest he then zooms off for cosmic adventures in the rest of the series. It's all perfectly pleasant, and extremely glossy - much like the Akin & Garvey poster last time, but here with Marhsall Rogers inked by the veteran Joe Rubinstein, who appears to be trying (and succeeding) to keep up with the current shiny style. 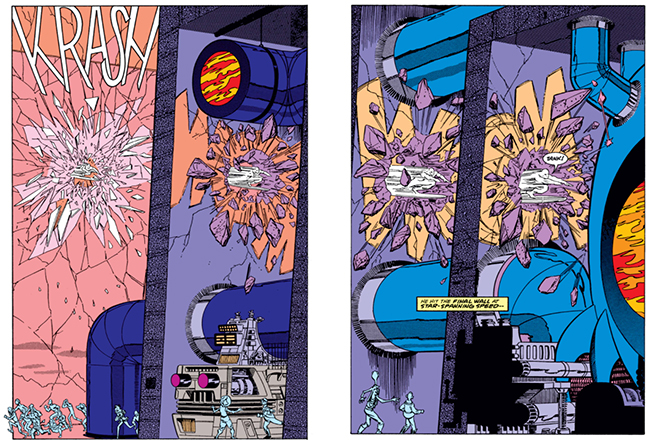 Other than that the only oddity is that the Fantastic Four line-up is Mr Fantastic, Invisible Woman, The Thing and She-Hulk, which is not a combination I was ever aware of existing, although we're now just past the Byrne run of the series, which is when I stopped buying it. Steve Englehart was writing the FF then, as he was this series, so I guess he'd know what the line-up was - we'll find out next time when we look at an issue of his run on "The Fantastic Four", featuring a whole lot of Adult Issues and another classic Doom trope: popping up at the very end for the cliffhanger. See you then!