All In The Family!

We're getting very close to the end of 'The Marvel Age' now, and this issue feels like a good example of what Marvel comics were like at this point, with some nice-looking but fairly unexciting artwork, a LOT of continuity, and some 'adult themes' which are dealt with in a way that feels rather uncomfortable now.

The main thrust of the storyline is that The Thing has taken over the running of the Fantastic Four because Mr Fantastic and the Invisible Woman want to go off and spend more time with their son Franklin. The Human Torch (now married to Alicia) is still around, which means that Ben Grimm still has to find two extra members, and the issue is mostly about how he starts making those choices. This involves an awful lot of Talking and Thinking and characters not really doing much at all - the Thing spends the first two pages standing on a roof having a Good Old Think, and apart from a couple of brief sequences where Superheroes Fight Each Other, that's pretty much how it carries on.

Crystal, former team-member and ex of Johnny Storm, pops in to see her estranged husband Quicksilver, who the FF recently captured after he'd gone mad. He claims to have been driven mad by Crystal's marital infidelity, and there's some distinctly iffy scenes throughout the issue where other characters react to this as if they were in the 1950s, rather than the 1980s. 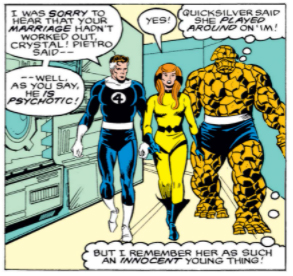 It reminds me of the scene back in Fantastic Four #237 where it's hinted that Ben and Alicia had sex whilst they were in their robot bodies in Liddleville, and Ben struggles to cope with this - not because he was human, or they were trapped in tiny robot bodies, but because they weren't married. 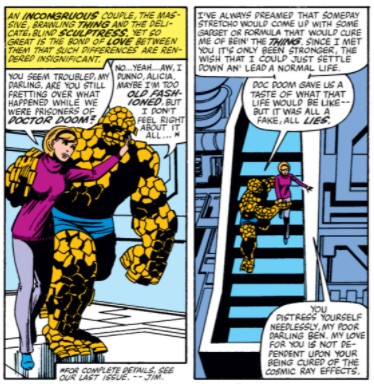 Talking of Alicia, Ben is still not happy about her being married to Johnny (we'll eventually find out that she's actually a Skrull pretending to be Alicia, but that's a way off yet), so when he asks Crystal to join the team the others all wander whether he's just doing it to drive a wedge between the newlyweds. The message seems to be that Crystal has already cheated in her own marriage, so won't be worried about intervening in someone else's. 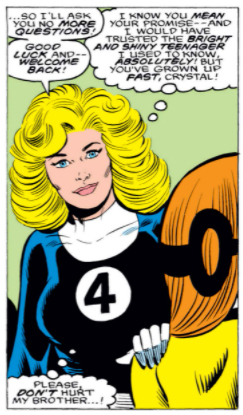 While all that's going on we get a brief glimpse into the padded holding cells where Quicksilver is being kept next door to Kristoff, who we last saw two years ago, back in Fantastic Four #279. 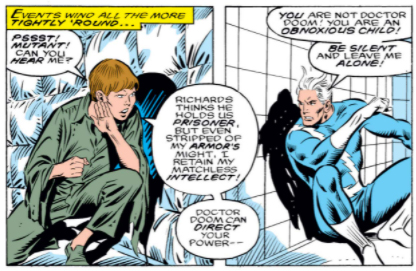 This leads to a couple of important questions. Firstly, if Kristoff has been under the care of the Fantastic Four for all that time, how come they've never given him a decent change of clothes? Secondly, Reed says that "The Courts have agreed to let us keep him temporarily while specialists come in to check him over constantly" but he looks very much like a prisoner to me, kept in a privately owned padded cell against his will with no visitors apparent at any point. Thirdly, and finally - the FF have a whole prison facility? Who else have they been keeping in there?!? 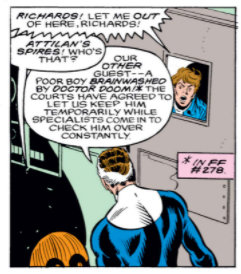 The politics of all of this are deeply conservative, and so is the artwork by Marvel legends John Buscema and Joe Sinnott. It all looks perfectly nice, even when Steve Englehart doesn't really give them much to illustrate apart from people having conversations, but it feels curiously out of place in a comic from 1987, just on the cusp of the 90's stylings of Rob Liefeld, Art Adams, Todd McFarlane and the like.

Throughout the story we've had an occasional narration from a Mysterious Voice who seems to be watching them all, plotting something. This is very Doom-like behaviour, as is Appearing Dramatically on the very last page, which is exactly what he does! 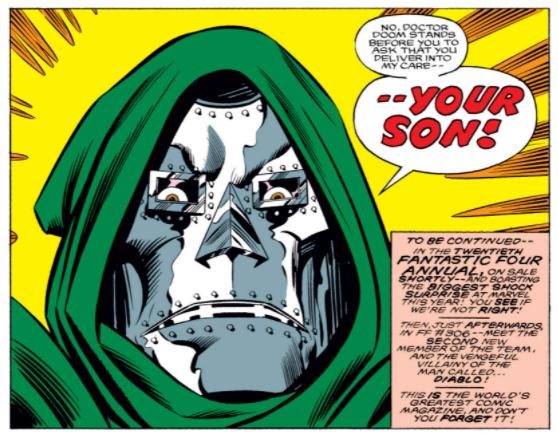 With all of the mentions of Kristoff we might expect that Doom has come to collect him, but no, "I care nothing for Kristoff", he says, he's there to collect Franklin instead. What can this mean? What is his big plan? We'll have to wait until next time to find out, in "Fantastic Four Annual" #20!