For the penultimate text in our mighty Corpus Of Doom we have one of the tiniest Doom appearances of all, with him being shown in just a single section of a multi-faceted splash page, plummeting through time (or possibly dimensions). 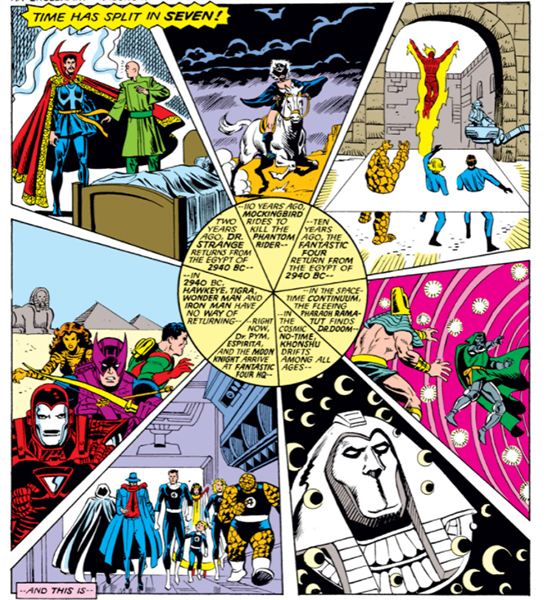 When I first encountered this I thought "Aha! Clearly Doom also appeared in the issue before this, but just didn't get recorded" but when I read the previous issue there was no Doom to be found. He's simply being used here as an illustration of a particular point in time when Rama Tut (who I think is, or has been, part of this story) met Doom, which we saw way way back in Fantastic Four Annual #2. It's actually very similar to the way Doom was used as part of Kang's back story, referring to part of the same story in Avengers #269. Doom is now such a key part of the Marvel Universe that he's being used as a signifier for other character's stories!

By the way, if I seem a bit vague about whether Rama Tut appeared in the story before this, that's because I am. I have read this particular comic several times for this blog and as part of my PhD, but very little of it has stuck in my brain, and apart from the fact that Doctor Doom isn't in it, I couldn't tell you much about the issue before either. This is partly because I have read a lot of comics over the course of the past several years, but it's mostly because this particular storyline is an unfortunate mixture of the Very Confusing and the Not Very Memorable. It's something to do with The West Coast Avengers splitting up, going back in time, meeting some other superheroes and then... er... coming back again, but what it's all for I could not say. The whole thing is very much of its time for Marvel comics, especially with the Al Milgrom art which carries with it the distinct whiff of being done in a hurry, and dense continuity-heavy storytelling that doesn't mean much even to me, who has spent several years knee deep in the Marvel Universe.

It's not a particularly auspicious text to start bringing down the curtain on Doom's appearances in The Marvel Age, and the final text next time isn't much better, but fear not True Believers, we do have some Addenda which will be a lot more fun. We've got this far, let's keep on going to the end!