So here we are, at the very last, final and ultimate text in this long long look at Doctor Doom in The Marvel Age!

All right, we're not entirely finished, as there's still a few extra items that I've found over the past year or so that I'll be covering in Addenda over the next couple of weeks, but this is definitely the last item we'll be looking at chronologically and, like so many of the texts we've looked at over the past several years, it is... er... mildly underwhelming!

This story takes place in an odd little period for the main "Thor" comic when the ongoing storyline was paused for a few months to be replaced by a series of one-off stories instead. The following month has a seemingly unrelated story about a Thor of the future, for instance. I don't know what was going on, and if I was looking at Thor as a transmedia character in this or the following period then I'd have a look, but I'm not so I won't! All we need to know here is that this gives Tom Defalco the opportunity to tell an "untold tale of The Secret Wars", something which is rather cheekily advertised on the cover with a corner banner very similar to the ones we saw for "Secret Wars II" tie-ins a year earlier.

The main plot is basically a re-telling of the first few issues of "Secret Wars" as told from the perspective of The Enchantress, particularly the bit in Secret Wars #4 where she and Thor teleported away from everybody else to have a chat and do some kissing. I do remember this bit from when I looked at that comic at the start of this year, but it wasn't exactly one of the major plot points, and I'm not entirely sure why Defalco felt the need to return to it. Perhaps it's an attempt to stamp his authority on Jim Shooter's big storyline, just as he was about to replace him as Editor-in-chief the following month. On the other hand, it might have been a way of paying tribute to him, or indeed nothing to do with either.

There's a framing device which sees The Enchantress popping over to see her sister Lorelei and telling her to stop messing men around and learn to appreciate true love. To illustrate this she retells the her part in Secret Wars focussing on that soppy bit with Thor. It's comics, so the big emotional peak of it all comes when she has to pretend she isn't sad about her unrequited love being disintegrated, leaving only his helmet. "Do you question the wisdom of my actions?" asks Doctor Doom.

We've all been there haven't we? Doctor Doom is threaded throughout, here taking on the double role as an avatar of villainy, and as a signifier of Secret Wars himself. He was the lead character, so whenever you see Doom standing with a few other supervillains in a very dull landscape of purple mountains, you can pretty much be assured it's a flashback to Secret Wars.

I particularly like the way that Ron Frenz and Brett Breeding do a tribute here to those roll calls that Secret Wars used to love, showing all of the heroes and villains standing in a nice neat line. Frenz and Breeding are a very attractive combination on art, making the whole thing look much classier than the original did, and much classier than it deserves to be. Interestingly Ron Frenz starts off with rounded corners for the flashbacks, but then drops them for most of the story, only returning to them at the end just before we go back to the Enchantress. It seems to work, although your own mileage may vary on how interesting that actually is! 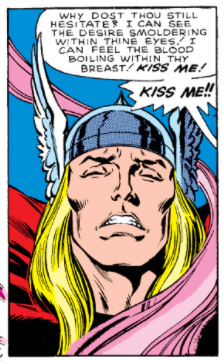 Thor eventually does not snog the Enchantress, the story carries on in exactly the same way it originally did (there's no retconning here, it's not so much an "untold tale" as a "slightly different viewpoint on an already told tale"), and it all ends with the Enchantress saying "SO THERE!" and zapping off. Brilliantly, Lorelei thinks about what her sister has said for a moment then has a good old laugh about it, having learnt precisely nothing. 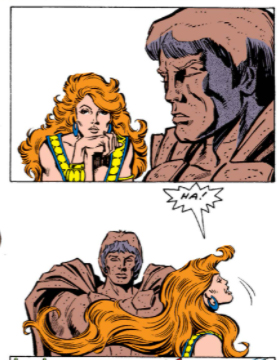 And that's the end of that - the final Doom appearance (chronologically anyway), and it's a not particularly thrilling comic where he pops up to do his very specific thing of Being Doctor Doom for a little while (which is all done very well) and then steps back out of the spotlight. I really would have liked to have had a big blowout ending as the final text, and if Jim Shooter had lasted in post a bit longer we could have done that with the Triumph And Torment graphic novel, but in a way this is more fitting. Going through the history of Marvel comics in this way has meant avoiding the well trodden paths through the "important" texts or even the "really really good" ones, instead taking a semi-random sampling of the sort of comics that were actually around at the time. It's like listening to a recording of actual radio programmes from the 1960s, rather than a "Best Of The Sixties" compilation - in both cases you get a lot more rubbish, but also a few more interesting snippets that you'd otherwise have missed.

There'll be more earth-shattering statements like this in a few weeks, when I'll be having a look back at what we might have learnt from all this (hopefully more than Lorelei did), but next time we'll be going back to the mid-1970s to have a long, yearning look at the legendary Marvel World Adventure Playset!