Today we're taking a whirlwind trip around some of the additional items I've found featuring Doctor Doom that don't really fit into the corpus of narrative texts, but are worth a quick mention.

First of all we've got the Golden Everything Workbook which claims to be a series of "fun" puzzles for kids but is actually extra homework with images of superheroes added to make it more palatable. I don't know much about it because it's another of those texts that aren't available online and are far too expensive for me to just buy. I do know that Doctor Doom's in at least on of them though, as I found the below picture online: 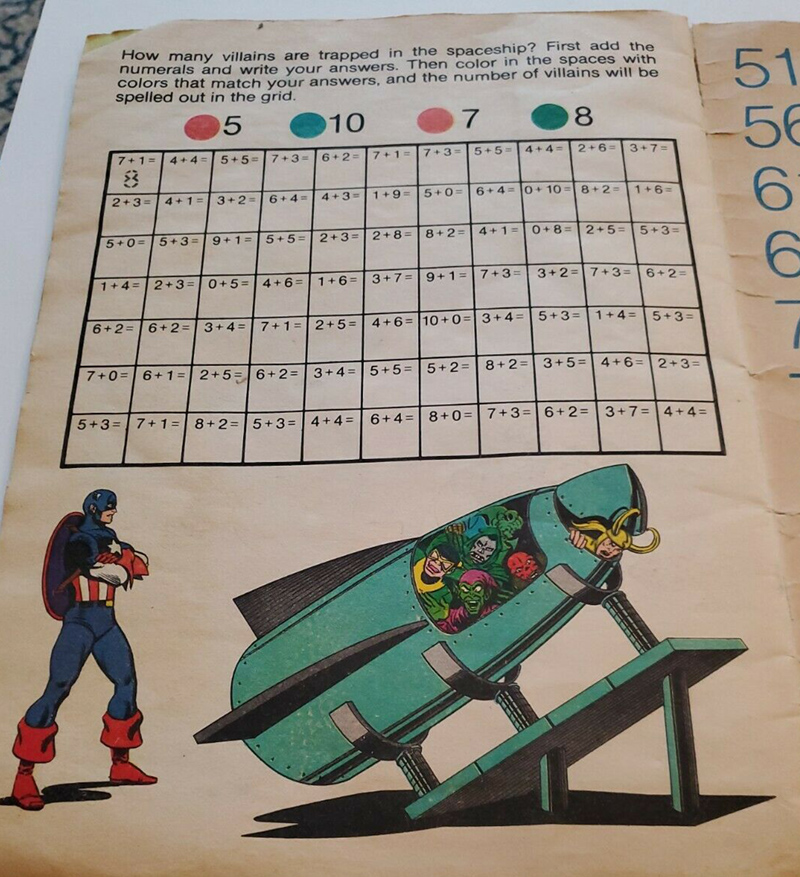 Here we see Doctor Doom in a crowd of villains - right in the centre, in fact - doing his usual job of symbolising villainy in general, something we've seen him do an awful lot over the years. Doom also appeared in the Spider-Man and the Marvel Heroes Rub 'n Play Magic Transfer Colorforms Set in 1978 and the same company's Marvel Super-Heroes Shrinky Dinks Collectors Set in 1984 as one of the few villains. We've looked at a few other examples of Doom on non-narrative promotional items over the years, such as the Marvel Slurpee cups, where Doom gets chosen as a representative of villainy, much as he does in this poster for a "super card collection" promotion, which was run in conjunction with Marvel UK in 1979. 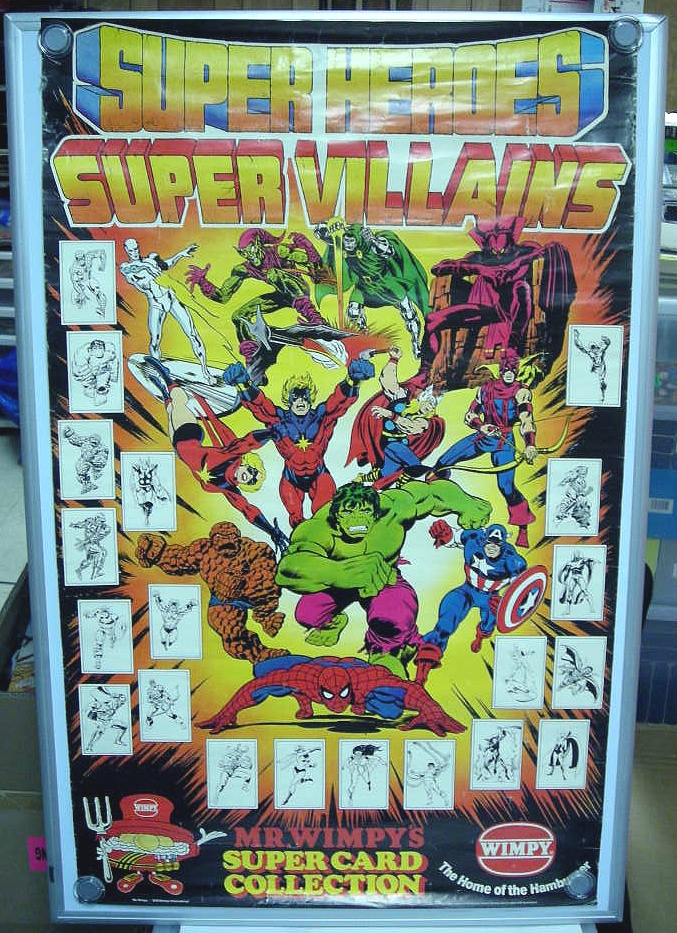 These cards don't feature in the main corpus for several reasons, including the facts that it's not issued by Marvel, and also that I don't want to pay over 200 quid on eBay to look at them! However, the main reason for not including a lot of these items is that they don't contain narratives. When I initially set this out as a condition for corpus inclusion my PhD supervisors pointed out that toys and games do have narratives, it's just that these are made up by the toys' owners as part of play. One fun-sounding but frighteningly expensive example of this is The New Fantastic Four Board Game, which was a tie-in for the New Fantastic Four cartoon featuring HERBIE the robot. Herbie's all over the game, but there's quite a lot of Doctor Doom too! 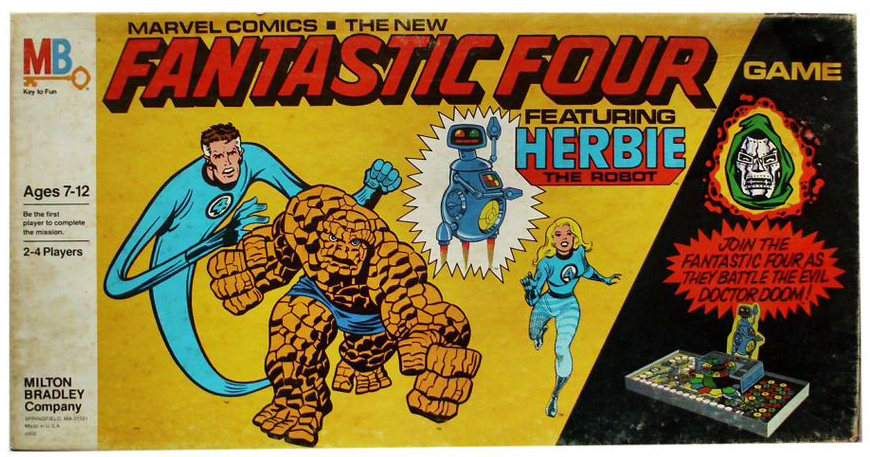 The classic example of toys featuring Doom is probably the Secret Wars Action Figures. I ruled this out of the corpus early on, so never covered them on this blog, which is probably a good idea as this is one item I would have been sorely tempted to hunt eBay for, especially after watching this Doom-heavy TV advertisement:

I love the way that "Doctor Doom and the Doom Platoon" is intoned with such gravitas. They should bring that back as a team name! Doom also featured (sort of) in an advert for Personna Double Razors starring Stan Lee. Well, he was mentioned anyway - apparently Stan says he has to be able to have a worry-free shave because "I've got Spider-man and all these characters and super villains like Dr. Doom to worry about", although the actual video has been lost to time. The best I could find was this breakdown of it on twitter: 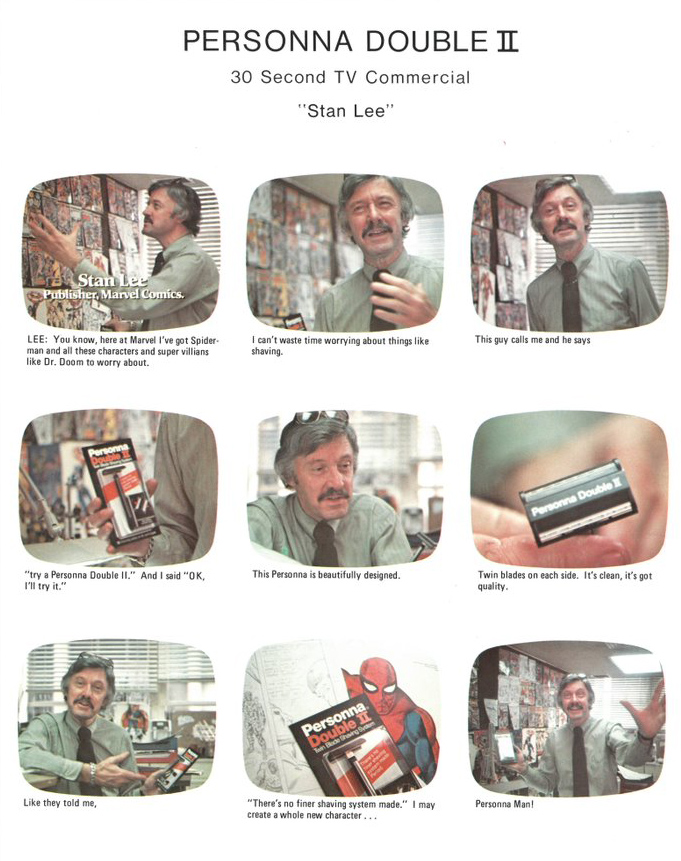 And finally, the item that I would most like to have included in the corpus but couldn't really justify, is the Marvelmania Doctor Doom poster specially created by Jack Kirby. 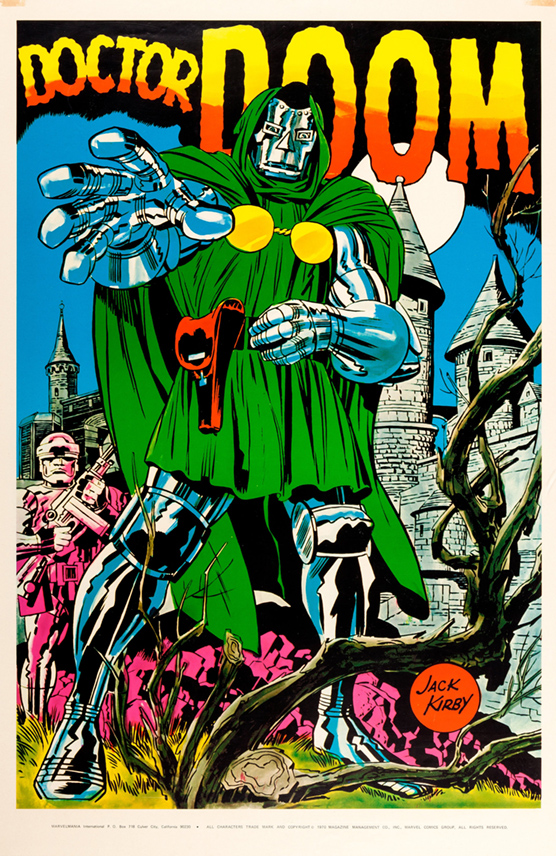 I mean, just look how gorgeous that is! I love this image so much I have used it in Conference Papers as a way to explain how Doom's signifiers work - this is an especially great example because it not only includes aspects of Doom's appearance but also his name, actions, location and on top of everything else Jack Kirby's name as a textual and marketing author. It also looks amazing, but sadly it's not a narrative and it wasn't issued by Marvel, so I couldn't really justify it. It's also very expensive - this poster was sold on an auction site for over $400 - otherwise I would definitely have been chasing it on eBay!

And that just about rounds up all the extra items I've found over the years, which in turn almost rounds off this whole blog. All that remains is to have a look back at some of the Lessons Learned, which begins in a couple of weeks (after I've been on holiday!) with the startling revelation that Teenage Me was - incredibly - correct in almost all his comics opinions back in the 1980s. Join me next week to find out why!