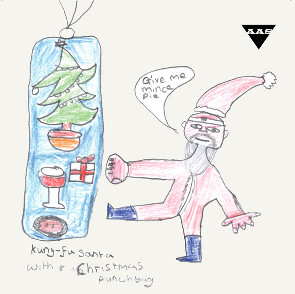 The AAS "Christmas Card" CD from 2005, featuring a Christmas song and an extra track from us, Frankie Machine, Plans & Apologies, Johnny Domino, The Frightened Prisoners Of The Kraken and Dr Coca-Cola McDonalds. Our two songs are EXCLUSIVE tracks from our Cornwall SESSIONS. The Advent Calendar of FACT was recorded especially for this compilation, and then we decided to use Never Going Back To Aldi's because the DISC with the raw tracks on had got corrupted, so we couldn't remix it for the album. The mix we DID have, however, was pretty good, so all was well!